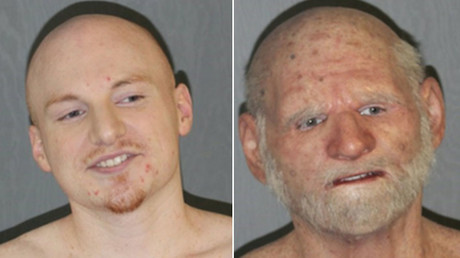 A suspected drug dealer who had managed to evade US police for more than five months was finally caught after he was found disguised as a balding “elderly man” at a Massachusetts home.

Shaun “Shizz” Miller had reportedly been on the run since April, when authorities named him as a suspect in a drug trafficking investigation.

On Thursday, law enforcement officers surrounded a house in South Yarmouth in Barnstable County, where the 31-year-old was thought to be staying. However, after officers called for Miller to give himself up there was apparently some confusion when an elderly man emerged from the house.

“Upon further investigation, officers determined that the ‘elderly man’ was in fact Miller, and at that point, officers pulled off Miller’s realistic disguise and placed him under arrest,” a statement by the US Department of Justice read.

A mugshot of Miller’s bizarre get-up suggests he had gone to great lengths not to be recognized. It shows the 31-year-old wearing a fake nose, eyebrows, and grey beard. Miller even appears to have tried to alter his pale skin with prosthetics featuring liver spots.

Police found two loaded weapons and $30,000 in cash stashed in a laundry basket during a search of the property. Miller has been charged with “possession of heroin with intent to distribute” and is awaiting a hearing at a US District Court in Boston.

Shizz Miller’s impersonation as a retiree is by no means the strangest disguise to be donned in order to avoid a run-in with the law. Here are five other criminally bad attempts to throw police off the scent:

Matthew Allan McNelly and Joey Lee Miller were no masters of disguise. Instead of covering their faces with a balaclava, or literally anything at all, the pair thought it best to color their faces with a black magic marker before attempting to break into a home.

Unsurprisingly, alcohol was involved in the hapless duo’s decision making process, and they were later charged with attempted robbery.

Carroll Police Chief Jeff Caylor described the poorly drawn on masks as one of the strangest things he’d ever encountered. “I’ve seen a lot of things that make me laugh and weird things but this was probably the best combination of the two,” he told CNN.

This was certainly creative, but removing the disguise can’t have been much fun.

Nicknamed the “Duct tape bandit,” Kasey Kazee was jailed in 2008 for trying to hold-up a liquor store in Kentucky. With silver tape wrapped around his head, save for his mouth and eyes, the then 24-year-old’s heist was unsurprisingly foiled by store employees.

Dubbed the “Darth Vader raider” in the media, this individual was responsible for a number of questionable headlines, as well as the theft of a New York bank back in 2010.

CCTV footage of the robbery of a Chase bank in Setauket shows a person threatening staff and customers with a gun while dressed as the villain from Star Wars – and, with the dark side of the Force on his side, the Sith Lord successfully made off with the loot too, according to the New York Post.

Lincolnshire Police were faced with an unusual crime last November, when they were called out to a local newsagent who had been robbed by two men dressed as a pair of pandas.

A statement revealed how the “bears” had threatened a shop clerk before making off with money from a safe. Though the police were keen to trace the thieves’ onesie outfits, it is thought the two men who carried out the peculiar robbery are still at large.

In a copycat crime plucked straight from the script of a Hollywood movie, a US couple managed to make off with more than $100,000 from a Chicago TCF bank dressed as nuns in May 2011.

During the subsequent trial, the court heard how Navahcia Edwards had previously worked at the bank and put a gun to the head of staff members in order to gain access to the vault.

Edwards was sentenced to seven and a half years in prison for her role in the robbery, along with her then-boyfriend. The pair was said to have been inspired by Ben Affleck’s film, The Town.