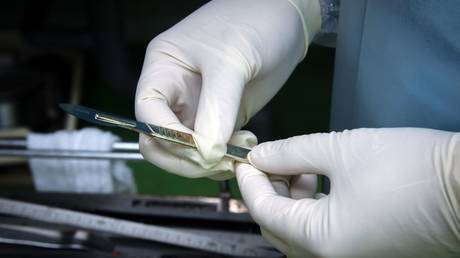 A Florida surgeon who cut out a woman’s kidney after mistaking it for a tumor, is to pay a fine of $3,000 and undergo extra training on preoperative patient evaluation. He hadn’t properly read medical records before the operation.

Ramon Vazquez made the blunder during a surgical procedure at the Wellington Regional Medical Center in April 2016. The man was tasked with cutting female patient Maureen Pacheco open so that two other surgeons could perform a back operation on her.

But he noticed an abnormality, which he himself hastily diagnosed as “gynecological malignancy, lymphoma and/or other metastatic disease,” an administrative complaint by the Florida Department of Health reads. Vazquez decided to act on the alleged tumor without informing the patient. As result, the pelvic mass he discovered “was clipped, transected and removed in its entirety.”


But a pathologist at the hospital later made a shocking revelation the removed mass actually “was an intact pelvic kidney.” It turned out that patient Pacheco had a kidney not ascending into her abdomen. Vazquez would’ve known about this if he’d reviewed the patient’s medical records before rushing to use his scalpel, but he neglected to do so.

The Florida Department of Health ruled that the surgeon’s diagnosis was not related to Pacheco’s medical condition and that removing her healthy kidney was therefore “a medically unnecessary procedure.”

The woman sued two primary doctors in her operation and received $250,000 from each of them as part of a settlement reached last year. Vazquez was also sued for malpractice and settled the case for a nominal amount, his lawyers said.

There are usually two kidneys in a human body and being left with one such organ is no obstacle to leading a healthy life. But Pacheco’s legal team insisted that Vazquez’s mistake made their client more susceptible to chronic kidney disease and renal failure.

Also on rt.com
‘What about sterile surgery?’: Woman in shock after medics use duct tape to bandage her mother


The Florida Board of Medicine issued its final order on the case in late 2018, but it was only obtained by the media this week. It ruled that Vazquez must pay a $3,000 fine and give a one-hour lecture on wrong-site surgery to his fellow hospital staff. The surgeon would also attend courses on preoperative evaluation of surgical patients, and fork out another $4,817.90 in court costs.