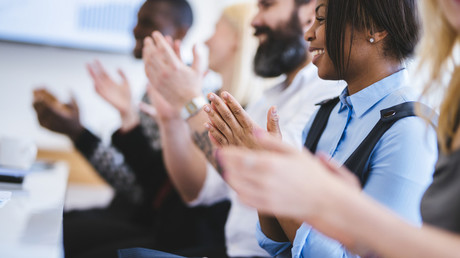 In an effort to offer a more inclusive and “respectful” environment, University of Manchester students union has banned traditional clapping and replaced it with “jazz hands” – a movement which apparently causes fewer problems.

Student representatives at the university voted to replace the nosier clapping, cheering and whooping commonly used to show appreciation at social gatherings with the British Sign Language (BSL) version of clapping – which entails waving both hands simultaneously.

The reason? Traditional clapping is apparently non-inclusive to deaf people and can cause other problems for students with autism or sensory issues, according to Sara Khan, the union’s liberation and access officer, who proposed the motion herself.

From now on, the BSL version of clapping will be used at students union events like debates and talks – and other student groups and societies are also being encouraged to banish audible clapping and introduce the jazz hands movement instead.

Khan said that nosey clapping can “discourage” some people from showing up to democratic events and that the implementation of the jazz hands alternative would help to foster an environment of respect. “A lot of the time, even in Parliamentary debates, I’ve seen that clapping, whooping, talking over each other, loud noises, encourages an atmosphere that is not as respectful as it could be,” she told the BBC.

Not everyone welcomed the inclusivity-enhancing measure, however, with some high profile figures even getting involved on Twitter. Television host Piers Morgan said the ban was a sign that Britain was “losing its mind” while fellow broadcaster Jeremy Vine tweeted a picture of British soldiers huddled in trenches during the First World War, writing in a since-deleted tweet that they had somehow managed to “ignore the difficulties caused by sudden noises 100 years ago”.

Many others on Twitter were also skeptical about the move, with one suggesting it sounded like something from “Mao’s China” and another writing that having a room full of people staring at you and doing jazz hands would probably be a very uncomfortable experience. One tweeter even suggested that jazz hands might not be inclusive to blind people, who would not be able see what was happening.

But what if you were a blind speaker and had done a great presentation? Jazz hands from the audience would make you feel you had died on your arse! Manchester University student union bans clapping https://t.co/Y3Gt9B7kFf

Universities are officially cults. I hope some spotty, WKD-drinking revolutionary is running around Manchester’s Union right now, clapping in protest at this nonsense policy, which sounds more fitting for Mao’s China than Class of 2018’s production of Bugsy Malone https://t.co/mmqYPAM50c

Manchester university has banned clapping as it triggers anxiety. So students are being encouraged to use jazz hands.

Because 30 people staring at you in silence doing jazz hands won’t make you feel uncomfortable in the slightest.#clapping#jazzhands

The National Union of Students in the UK also introduced BSL clapping at its events in 2015 in an effort to ensure that “all members of society” feel comfortable and able to contribute.