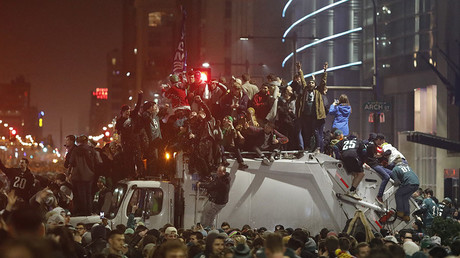 A blast has hit Philadelphia and several people have reportedly been injured in street violence amid celebrations of the Philadelphia Eagles’ victory over the New England Patriots in Super Bowl LII.

Celebrations of the historic Super Bowl victory of the Philadelphia Eagles led to havoc on Sunday night, as cheering crowds began turning a car upside down and an explosion hit the city.

Some people said on Twitter that Antifa activists had joined the rallies, attaching a video of men apparently attempting to hang an uprooted traffic light from a lamp post.

Earlier, a wild crowd reportedly attacked police, throwing bottles at them and forcing the officers to put on their helmets.

This is riveting. Bottles being thrown. Helmets going on. These first responders have their hands full. And now there was an explosion. #PhillyPoliceScanner

One policeman was run over, according to social media reports.