An email leaked by WikiLeaks reveals that when Hillary Clinton was US secretary of state in 2011, billionaire George Soros instructed her on how to handle unrest in Albania, stressing it “needs urgent attention at senior levels of the US government.”

“A serious situation has arisen in Albania which needs urgent attention at senior levels of the US government. You may know that an opposition demonstration in Tirana on Friday resulted in the deaths of three people and the destruction of property,” Soros says, according to the leaked email.

Three men were shot dead as anti-government demonstrators clashed with police in the Albanian capital in late January of 2011. Supporters of the opposition Socialist Party refused to accept the results of a 2009 election, citing corruption and fraud, when then-Prime Minister Sali Berisha’s Democratic Party won by a thin margin. Berisha accused the opposition of attempting to provoke a Tunisia-style uprising, saying “the bastard children of Albania’s own Ben Alis conceived Tunisian scenarios.”

“There are serious concerns about further unrest connected to a counter-demonstration to be organized by the governing party… and a follow-up event by the opposition two days later to memorialize the victims,” Soros says.

“The prospect of tens of thousands of people entering the streets in an already inflamed political environment bodes ill for the return of public order and the country’s fragile democratic process,” he adds.

“I believe two things need to be done urgently,” he adds.

“1. Bring the full weight of the international community to bear on Prime Minister Berisha and opposition leader Edi Rama to forestall further public demonstrations and to tone down public pronouncements.

2. Appoint a senior European official as a mediator.”

“The US and the EU must work in complete harmony over this, but given Albania’s European aspirations the EU must take the lead,” he stressed, adding that his foundation in Tirana was “monitoring the situation closely and can provide independent analysis of the crisis.” 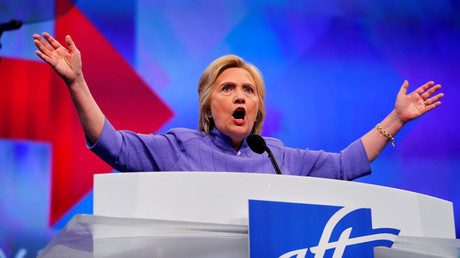 Several days after the email was sent to Clinton, the EU did send one of Soros’ suggested nominees, Miroslav Lajcak, to meet Albanian leaders in Tirana to try to mediate an end to the unrest, Reuters reported.

In March, WikiLeaks launched a searchable archive consisting of 30,322 emails from Hillary Clinton’s private email server that she used while serving as US secretary of state. The 50,547 pages of documents cover Clinton’s correspondence from June 30, 2010 to August 12, 2014, of which 7,570 were sent by Clinton herself.

Last month, the whistleblowing website published an archive of over 1,200 of Clinton’s private emails pertaining to the Iraq War. Ahead of the release, WikiLeaks founder Julian Assange said the “upcoming leaks in relation to Hillary Clinton” would be enough to indict her.

Soros made a name for himself as the “man who broke the Bank of England” by engaging in questionable Forex hedging and betting against the sterling pound – which made him more than $1 billion in one day in September of 1992. Some have speculated that Soros has benefited from insider trading information when making investments. In 2002, a Paris court found Soros guilty of using inside information to profit from a 1988 takeover deal for bank Societe Generale.