I stopped trying to predict markets back in 2008 when the Federal Reserve, Treasury Department, Wall Street bankers, and their propaganda peddling media mouthpieces colluded to rig the markets to benefit the elite establishment players while screwing average Americans. I haven’t owned any stocks to speak of since 2006. I missed the final blow-off, the 50% crash, and the subsequent engineered new bubble. But that doesn’t stop me from assessing our true economic situation, market valuations, and historical comparisons in order to prove the irrationality and idiocy of the current narrative.

The proof of this market being rigged and not based upon valuations, corporate earnings, discounted cash flows, or anything related to free market capitalism, was the reaction to Trump’s upset victory. The narrative was status quo Hillary was good for markets and Trump’s anti-establishment rhetoric would unnerve the markets. When the Dow futures plummeted by 800 points on election night, left wingers like Krugman cackled and predicted imminent collapse. The collapse lasted about 30 minutes, as the Dow recovered all 800 points and has subsequently advanced another 1,500 points since election day. Krugman’s predictive abilities proven stellar once again.

It’s almost as if the Deep State oligarchs and their Wall Street co-conspirators are declaring to the world they are still running this show. Despite deteriorating economic conditions, skyrocketing debt, stagnant wages, and bubbles in the stock, bond, and real estate markets, the narrative being spun is a glorious future of tax cuts, fewer regulations, jobs coming back to America, and GDP growth so high, it will easily pay for all the tax cuts and spending increases. You would think those high-frequency trading machines, programmed by Ivy League MBA geniuses, would be smart enough to determine when markets are extremely overvalued as fundamentals are deteriorating.

Something is not making sense. During the debates, Trump declared on more than one occasion the stock market was in a bubble. It is now 2,000 points higher and he is proclaiming its advancement as an endorsement of his plan to drastically cut taxes, spend trillions, and Make America Great Again. The financial media, which despised Trump six weeks ago, is now peddling an economic recovery, soaring future corporate profits, and a stock market poised to blast through 20,000 to higher and higher all-time highs. I think that would swell, but let’s examine a few facts before putting our life savings in Twitter and Fakebook stock.

As proof that Wall Street despises Main Street when oil prices rise this is seen as a huge positive by the criminal bankers, as they see oil as an investment to be manipulated for profits. Falling oil and gas prices benefit everyday Americans trying to balance their monthly budgets. The drop in gas prices from $3.70 per gallon in mid-2014 to $1.70 per gallon in early 2016 helped average Americans save enough to partially offset soaring Obamacare costs, rising rents, and stagnant wages. But Wall Street and their corporate media talking heads have cheered the 33% increase in gasoline and the 85% increase in oil since February. Just as with TARP, what is good for Wall Street is not good for Main Street.

The Fed narrative of no inflation, supported by the sliced, diced, manipulated, massaged, hedonically and seasonally adjusted drivel produced by the government drones at the BLS, has benefited from the almost two-year decline in gas and oil prices. That is now reversing itself, as gasoline prices have risen at an annualized rate of 20% over the last three months. It is poised to rise by 30% to 40% year over year in the next few months. Even the Deep State government bureaucrats are having trouble disguising raging inflation in expenses affecting average Americans on a daily basis.

Yellen and her fellow Ivy League academic puppets continue to flog the 2% inflation mantra as if these theorists have any clue what the “ideal” rate of inflation should be. Even the manipulated core CPI has been running above 2% for all of 2016. Have you heard any captured media pundit report that CPI has been running at an annualized rate of 3.6% over the last three months? The Fed engineered housing bubble 2.0 has even driven the man made owners equivalent rent calculation up to a 3.5% annual rate. The Fed’s latest bubble blowing adventure has also driven the home ownership rate to a 50 year low. So much for Bush’s ownership society dream.

The truly hysterical drivel spewed by the BLS drones is that medical care costs are only rising at a 4% annual rate and only account for 8.4% of a family’s annual costs. The gyrations and hedonistic seasonal adjustments they must make to somehow configure 20% to 50% increases in premiums, doubling of co-pays, and $6,000 deductibles into a 4% annual increase must be a wonder to behold as they plug their fake variables into their excel spreadsheets. Anyone living in the real world, outside of the Imperial Capital, knows their annual living expenses are rising by at least 5% to 10%.

As Obama takes his victory tour, taking credit for the stupendous jobs recovery, the deplorables in middle America know their real wages have barely budged during the entire Obama recovery. If the unemployment rate was really 4.6%, would real wages be growing at less than 1%? NO. They would be growing at 3% and the Fed Funds rate would be at 3%, not .50%. With the labor participation rate at a thirty year low of 62.7%, a record number of Boomers having to work to survive, and 124 million full time employees supporting 102 million non-working Americans, you might have the real reason Trump won the election.

The false narrative propagated by the captured mainstream media propagandists has been the labor force participation rate falling is strictly due to Boomers retiring. Despite data proving the median Boomer household has less than $20,000 saved for retirement, the talking heads, and brainless bimbos on CNBC and other corporate media outlets continue to purposely mislead the public with misinformation about Boomers retiring to live lives of luxury and endless vacations.

Meanwhile, the only demographic showing dramatic increases in labor participation are the old fogies who forgot to save. How do the pundit propagandists explain the decline in participation by 25 to 54-year-olds in their prime working years? Are they busy finding themselves? Did they hit the lottery? 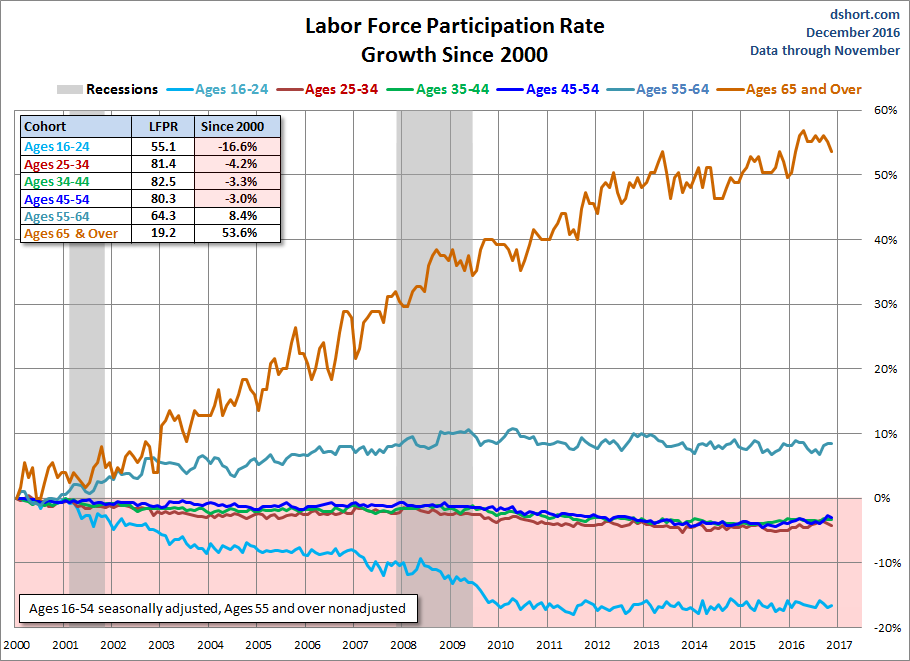 No matter how long Obama’s nose grows trying to convince the ignorant masses he has presided over the best economy in decades, inconvenient facts keep getting in the way. When real median household income is lower than it was in 2000, and not materially higher than it was in 1989, you might have economic stagnation. When you take into consideration the systematic under-reporting of inflation over this time frame, the real numbers are far worse than those portrayed in the chart. 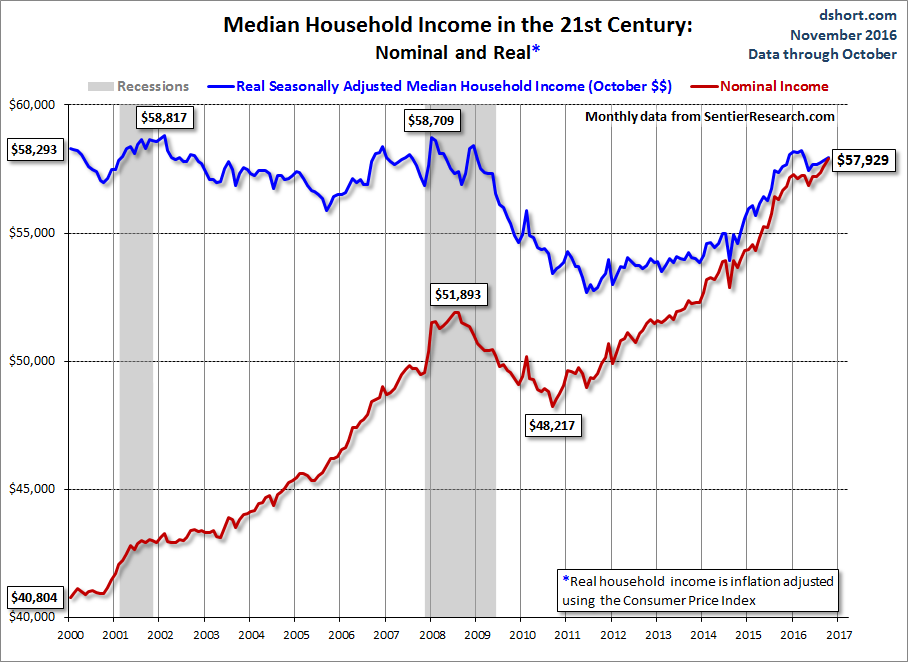 Obama hoots about all the jobs added during his reign of error but fails to mention that 94% of all jobs added since 2004 were either temporary or independent contractor jobs. Low-wage, part-time, no benefits, Obama jobs don’t pay the bills. That’s why a record number of Americans have to work multiple jobs to survive.

The narrative about an improving economy, thriving jobs market, and glorious future is bullshit. I know it. You know it. And your establishment puppeteers know it. But only “fake news” sites would dare reveal these inconvenient truths. The willfully ignorant public doesn’t want to know the truth because that would require critical thinking and making tough choices.

If the unemployment rate is really 4.6% and GDP is really growing, why are retail sales in the dumper, even with automakers giving their cars away at 0% interest for six years if you can sign an X on a loan document? At the same time, the establishment reports soaring consumer confidence, while consumers don’t act confident at all. Do you believe these propaganda surveys or your own eyes.

This Christmas (we’re allowed to use that word again now that Trump is on his way) shopping season is going to be atrocious. Retail sales over the last three months have grown at a pitiful 1.5%. If you adjust that for a true inflation rate of 5% or so, real retail sales are in decline. The bricks and mortar retailers are dying, as Amazon and other on-line outlets eat their lunch. The store closing announcements in February should be robust. More ghost malls coming to a neighborhood near you.