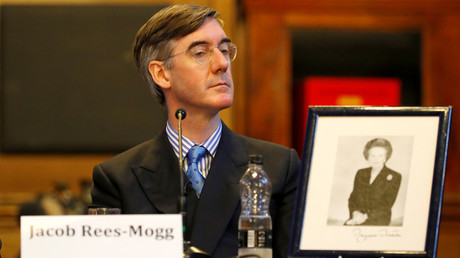 A black-and-white picture of Tory Brexiteer Jacob Rees-Mogg, standing side-by-side with his nanny in a room of what could be a ‘haunted house,’ has been described by social media users as “something out of a Hammer Horror film.”

The chilling image, thought to have been taken in 2000, was tweeted by @Tuckleton as part of his #Tuesdaythoughts – claiming that the picture of the posh, Eton-educated Rees-Mogg with his family’s nanny of 52 years, Veronica Crook, was “the stuff of nightmares.”

Social media has been quick to comment on the picture’s haunting composition with one Twitter user suggesting it would provide the perfect front cover for a Halloween card, and another arguing that it was like a poster for the classic horror film ‘Psycho.’ Comparisons to the freaky 1960s American sitcom, ‘The Munsters,’ were also made.

Hells flipping bells, looks like something out of a Hammer Horror film. Very scary.

It’s like a cinema poster for the English version of Psycho. Or something.

Crook, 75, was initially hired by Rees-Mogg’s parents in 1965, after the birth of their second daughter Charlotte, to take care of his sisters before he was born four years later in 1969. She once famously assisted the prominent backbencher’s failed 1997 general election campaign bid in Central Fife, Scotland.

The relationship between the two has been hilariously mocked by British actor and comedian Tracey Ullman on her sketch show for the BBC.

Rees-Mogg says of Crook: “She’s the most remarkable woman and, as you can imagine, incredibly good with children – but she might say it’s jolly hard work.” Crook has described Rees-Mogg’s behavior during his younger days, as “perfect – or for most of the time perfect,” the Daily Mail reports. “He wasn’t really naughty, he was a one-off,” she said in 2015.