One would be hard-pressed to find two newly elected world leaders more different than Mexican President Andres Manuel Lopez Obrador (AMLO) and Brazilian President-elect Jair Bolsonaro. The former is a moderate social democrat who promises to crack down on corruption and serve as an advocate for his nation’s poor and working people; the latter is a disciple of the military junta that ruled his country from 1964 to 1985, infamous for his racist, misogynist and anti-democracy comments on national television, who promised on the campaign trail, “I will give the police carte blanche to kill.”

Despite the clear differences between the two men, pundits have a bad habit of throwing them together—often revealing their preference for the Brazilian authoritarian. 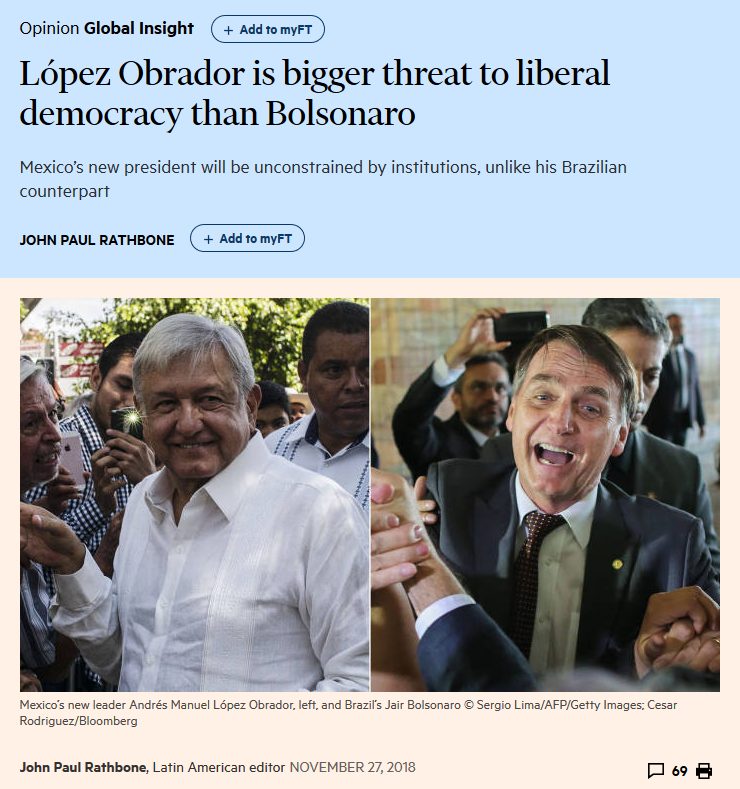 The Financial Times‘ Latin American editor (11/27/18) argues that Mexico’s president is more dangerous because he has the support of the people.

In the Financial Times (11/27/18), John Paul Rathbone argued that Lopez Obrador is a greater threat to liberal democracy than the retired army captain. His argument revolved around the idea that while both presidents-elect are representative of “epochal changes,” Lopez Obrador is more dangerous because only he will possess the political capital to see his agenda fully realized:

His party has majorities in the Senate and the Chamber. He has vast popular support, dominates his cabinet, inherits a relatively healthy macroeconomy thereby freeing him from immediate market pressures.

In contrast, he maintains that Bolsonaro will be kept in check by Brazilian institutions and opposition parties:

Mr. Bolsonaro faces the exact opposite. He is hemmed in. His party has a minority in both houses of Congress…. Unlike Mr López Obrador, his instincts seem to be to decentralise power, including independence for the central bank.

Rathbone’s premise is incorrect: He vastly overestimates Bolsonaro’s impotence. A similar mistake was made by CNN en Español presenter Andres Oppenheimer, who wrote in the Miami Herald (10/9/18):

Unlike most authoritarian leaders, Bolsonaro would not have a majority in Congress or a loyalist Supreme Court. While Bolsonaro will have the second-largest congressional bloc after the Workers’ Party, it will only hold 52 seats of the lower house’s 513 congressional seats.

Both Oppenheimer and Rathbone mistakenly imply that the Brazilian legislature will be controlled by the opposition, and therefore act as a brake on Bolsonaro’s more extreme aspirations. Even though only 52 deputies in the next congress will come from Bolsonaro’s Social Liberal Party, compared to 56 deputies of the Workers’ Party, all of the parties of the Brazilian right will hold a near super-majority in the Chamber of Deputies, with a total of 338 seats out of 513 in the lower house. This includes such parties as the Brazilian Democratic Movement, Progressistas and Patriota—instigators of the dubious 2016 impeachment of left-wing President Dilma Rousseff. These parties already have a history of doing the bidding of the far-right; don’t be surprised if they do it again.

Even if Rathbone were correct and the Brazilian president-elect did face an opposition-controlled legislature, the idea that a popular democrat is a bigger threat to democracy than an elitist who expresses nostalgia for dictatorship, and openly threatens to jail or exile his political opponents, is of course absurd. But Rathbone presents Bolsonaro and Lopez Obrador as comparable evils–both representative of a nebulous “populism” which stands opposed to a global “establishment”–and treats the fact that AMLO, unlike Bolsonaro, has a program that’s actually supported by his electorate as just making him the more dangerous of the two.

This is merely a rhetorical tool used to flatten the difference between right and left-wing challenges to the status quo—which differ greatly in both the illnesses they diagnose and the cures they seek to provide. Bolsonaro wishes to enforce a rigid hierarchy reminiscent of the old military dictatorship, which empowers the powerful and further dispossesses the vulnerable. AMLO wishes to break with the neoliberal orthodoxy that has dominated the world for decades, and turn the bloated and ineffectual Mexican state into an entity that can advocate for and support the Mexican working class. Two very different visions for two very different men.

The real reason Rathbone considers Bolsonaro the lesser evil is because both the journalist and his paper approve of Bolsonaro’s pro-business economic plan and fear AMLO’s redistributive program. This view is confirmed by the next line, in which Rathbone hails Bolsonaro’s commitment to “independence for the central bank.” By this, Rathbone means handing its reins to free-market proponent Roberto Campos Neto, former chief treasury officer of Banco Santander. In Rathbone’s priorities, Bolsonaro’s fondness for a brutal dictatorship is not as important as his willingness to sustain neoliberal economic policies.

Equally attractive to some commentators are Bolsonaro’s pro-Washington foreign policy views. In another article for the Herald (12/4/18), Oppenheimer expressed dismay over AMLO’s decision to re-open diplomatic relations with the left-wing Venezuelan government of Nicolas Maduro, while praising Bolsonaro for his “close foreign policy alignment with the United States, which could result in an even stronger international pressure on the Maduro regime.” Oppenheimer makes the twisted claim that “restoration of democracy in Venezuela” will be hastened by a politician who has said he wants to create a Brazil “that is similar to the one we had 40, 50 years ago”–i.e., when it was ruled by an authoritarian military regime.

In an earlier Herald column (11/28/18), Oppenheimer criticized AMLO and members of his party as being of the “jurassic left” for offering an olive branch to Maduro, and for praising the late Fidel Castro.

FAIR (10/31/18) earlier noted the enthusiastic response of the Wall Street Journal to Bolsonaro’s victory, praising him as a “reformer” with the ability to reverse “a legacy of economic and political failure” (10/29/18). The same paper (11/25/18) decries AMLO as as “an authoritarian populist with a strong bent for state intervention in the economy.” While Lopez Obrador gets a lecture from the New York Times (7/1/18) on the importance of ensuring that Mexico is “open for business,” the Grey Lady (10/26/18) praised Bolsonaro’s Finance Minister’s “ambitious plan” for widespread privatizations.

Latin America’s two newest heads of state are representative of the two paths available to the world at the present time: go right and appeal to nationalist authoritarianism, or go left and create a fairer, more equitable society. Corporate media outlets such as the Financial Times and Wall Street Journal have clearly identified their preference for the former.