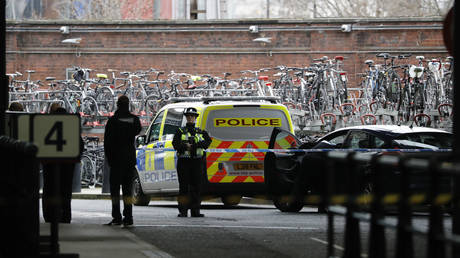 Three suspicious packages – all A4-sized white envelopes – appeared primed to start a small fire when opened, according to investigators.

“The Met Police Counter Terrorism Command is treating the incidents as a linked series and is keeping an open mind regarding motives,” the police force said.

MET Police also confirmed that police in Ireland were assisting the investigation.

Flights were not affected by the security alerts and no injuries have been reported, although at least one of the packages was opened by an unsuspecting staff member, and it partially burned.

Police are appealing for Londoners to be vigilant and report any suspicious packages.

London Mayor Sadiq Khan tweeted his thanks to the security services for their response to the packages.

.@Metpoliceuk Counter Terrorism Command has launched an investigation after three suspicious packages were found at locations around London today – thankfully there have been no injuries. I would like to thank first responders for their swift actions to keep Londoners safe. pic.twitter.com/d3OVfy4uYn

The fact that the envelopes had Irish stamps has immediately aroused suspicions that the incident could be related to tense relations between Dublin and London over Brexit negotiations.

The London Telegraph suggested that the incident could be part of a plot by dissident republican groups in Ireland. The issue of the border between Northern Ireland and the Republic of Ireland has been a major sticking point in Brexit talks, with the Irish side insisting on a ‘backstop’ measure to ensure that a hard border will never be introduced on the island, while the pro-Brexit side in the UK insist that a backstop is unnecessary to prevent a hard border and claim it is hampering a clean break from the EU.