BP will end its 26-year sponsorship of the Tate next year, citing an “extremely challenging business environment” as the cause, rejecting claims it has caved to years of protest against the firm’s involvement in the arts.

It follows a long campaign by activist group Liberate Tate, who have taken part in public protests against the sponsorship at the Tate gallery in London.

In November last year protesters occupied part of the gallery and tattooed each other with the levels of carbon dioxide in the atmosphere during the year of their birth. Last summer the group also spent 25 hours defacing the floor of the gallery with messages on climate change.

Liberate Tate have advocated the termination of BP’s sponsorship on the grounds that it is unethical to allow an oil company to sponsor art.

Member of Liberate Tate Yasmin De Silva said: “We’re thrilled with the news Tate is rid of BP. About 30 years ago, the tide turned on tobacco sponsorship, and now the same thing is happening to the oil industry. Of course Tate won’t rub it in BP’s face by acknowledging this decision is the result of the increasing public concern about climate change and the huge number of artists, members and gallery-goers speaking out against the controversial deal.” 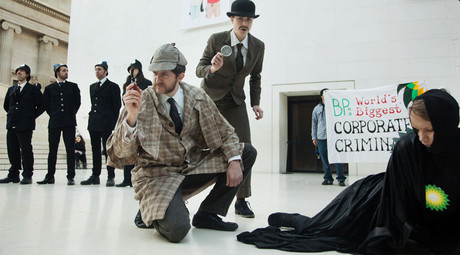 A Tate spokeswoman praised BP as an “outstanding example of patronage and collaboration over nearly 30 years.”

Speaking to the Independent, she said the sponsorship deal “represents one of the most significant long-term corporate investments in UK arts and culture,” praising its “groundbreaking support of the collection displays and other programs.”

A spokesperson for BP denied activists had forced the decision.

“They are free to express their points of view but our decision wasn’t influenced by that. It was a business decision,” she said, adding there are no plans to end sponsorship of other arts institutions.

“The decision to end our contractual relationship with the Tate has been a very difficult one. It reflects the extremely challenging business environment in which we are operating.

“We have seen the Tate’s extraordinary growth and success and we are proud to have played a small part in that.”