Suppressing RT and comments the US government doesn’t like is a direct violation of the First Amendment and freedom of speech, says NSA whistleblower William Binney. Other RT commentators say what they think of the US government move.

RT America has been forced to register as a ‘foreign agent’ in the US. The pressure from Washington began after US intelligence claimed the channel was an instrument for meddling and manipulation in America.

In September, the Justice Department demanded RT register as a foreign agent. Social media companies then began blocking its adverts on such networks as Google, YouTube, and Twitter. They did that ahead of testimony in Congress, despite having no problem with RT before that.

But why is RT facing such unprecedented pressure from the US government and what are the possible consequences of this latest move? 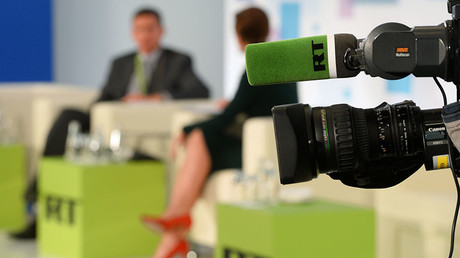 “It is a slap at the First Amendment. We, here in America, are always proud of having free speech, meaning that we weren’t going to suppress any kind of comments by anybody, even if we didn’t like them. That was our fundamental principle… Now that is pretty much a slap in the face. If we’re going to have TV stations like RT, who are funded by the Russians [register as foreign agents], why aren’t we going to force the BBC or other TV stations that are funded by countries to register also? We have no consistency in this – except we are selectively suppressing any kind of speech. That to me is a direct violation of our First Amendment to the Constitution.”

“One thing I’d just point out that is distinctive about RT – I have to admit this, and this is this: RT has never asked me for a pre-interview interview. CBS, ABC, NBC, Al Jazeera – they all say: “Can we figure out what you’re going to say, Mr. McGovern? Would you tell us what you’re going to say?” Sometimes BBC said: “Oh, we don’t need to hear that. We have somebody else.” RT has never asked: “What’s your gloss on this? What would you say about this?” All they do is say; “Here is the link, Mr. McGovern. We know you might know something about it. Please come on.” That is distinctive. And that is why I rejoice being asked to at least to talk to the people, who are smart enough to watch RT.”

GG: It’s dark and dangerous path, and we don’t know how far that path will now go. It is the branding of journalists as agents. That is very dangerous for the safety of journalists in many hot spots and difficult parts of the world…

Al Jazeera America was broadcasting freely and openly for many years in the US, even though the political line of Al Jazeera in places like Syria, for example, was deeply controversial, to say the very least. If we’re going to brand one group of journalists and broadcasters as foreign agents then inevitably all journalists will be branded by somebody as foreign agents…

The British Prime Minister just hours ago made similar noises unexpectedly. No one was expecting the statement that she just made. But if you follow the logic of the path that many British parliamentarians are now on – Theresa May is the prime minister because of Russia after all, if Putin fixed Brexit and Brexit ditched Cameron, then Theresa May is the prime minister because of the Russians. I’ll tell you what: if that turns out to be true – I’ll for one never forgive you!

RT:Is there a concerted effort to push RT out of the US? It’s been removed from YouTube’s premium package in the US, blocked from advertising on Twitter, etc. Now, this…

GG: Despite the fact that both – Google at the Congress and the others admitted that RT and Russia have broken none of the rules on the platform, but this package has not been yet reinstated on YouTube. Yes, of course except that in the 21st century – 17 years, almost 18 years – you can’t block coverage; you can’t block people consuming coverage in the modern world, but you can make it more difficult, and that seems to be where the US and maybe even the UK is headed.

But again you see with the 21st-century psychology – the book they try to ban always goes to the top of the best sellers list. The more difficult they try to make it, the more popular RT is becoming. People wear it as a kind of badge. Maybe I should get a badge – I am a foreign agent. It might become trendy; it might well backfire on the witch hunters – the people who are doing their best to destroy the very freedom of speech and expression they claim to stand for.

Ken Livingstone: The problem is that RT broadcast news that is true that American governments don’t want people to hear. Every evening I flip backward and forwards between BBC and RT, and Sky – every television channel has some sort of reflection of its national interest – it is inevitable.

But if I think back to what I saw on American television in the 1960s and 70s about the Vietnam War – it was an appalling level of bias and all of that. What I found very helpful about RT – it is telling us much more about what is happening in a horrific war in Yemen that you ever see on Western televisions. Western governments are trying to suppress the news of what Saudi Arabia is doing.

RT: To what extent will this latest step further damage bilateral relations between Russia and the US?

KL: We had this sort of attempt to demonize Putin’s regime. We’re told endless lies about what happened in Ukraine, in Crimea, and so on. I almost never find anywhere in the Western media the truth about what happened in Ukraine and in Crimea, and what the origins in the past of all that are. Basically to understand today’s politics you really have to understand some history as well. Broadly, what you get on American television is almost like adverts, rather than a serious historical analysis.

RT:What does this move say about the state of press freedom in the US?

KL: The idea that there is a free press is nonsense. Here in Britain and certainly in America so many of the newspapers are owned by billionaires who don’t pay their tax locally, launder their money offshore – they are not really representing the American people, they are just making a lot of money themselves…I just think myself, when I was questioning the British government’s policy under Mrs. Thatcher about what they were doing in Northern Ireland – the BBC was told that I should be on their television. For about 18 months I wasn’t interviewed at all…