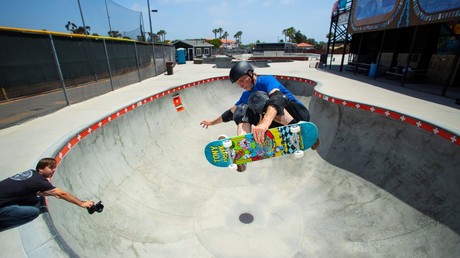 The first female skater to successfully replicate Tony Hawk’s perilous 360 degree loop as earned high praise from the veteran pro skater, who watched on as Lizzie Armanto picked herself up from a big fall to complete the trick.

Lizzie Armanto made history on Sunday when she dropped into the gnarly 16-foot tall circular ramp and managed to stick the board right through to the end. Armanto’s successful run around the loop came 20 years since legendary pro-skater Tony Hawk completed the same feat.

Only around a dozen skaters have ever completed the trick and Armanto’s actions make her the first woman to do so. Organized by NextVR, a live-streaming company, Sunday’s challenge saw a number of skaters pit their skills against the nerve-jangling ramp outside a warehouse owned by Hawk.

Three skaters: Charlie Blair, Jeromy Green and Lizzie Armanto were able to pull off the death- (or at least injury) defying stunt, according to the San Diego Union-Tribune.

Armanto completed the loop soon after a livestream video had ended. However, photographers were on hand to capture in the historic moment. Footage of the achievement shows Armanto dressed in red pants suffering a heavy fall. However, in another run at the loop she manages to complete the full 360 degree spin, much to the jubilation of onlookers.

Hawk, a household name after his 900 spin at the X Games and a series of skating video games by Activision, congratulated Armanto for finishing the loop.

“It was an inspiring display of fierce determination and skill, and we at @birdhouse are incredibly proud,” he said.