The south Asian city-state of Singapore is slated to become the venue of the highly anticipated meeting between US President Donald Trump and North Korean leader Kim Jong-un, US media report. The summit is reportedly set for June.

Multiple US media outlets, citing officials, reported on Wednesday that the US and North Korea have settled on Singapore as the location of the first-ever meeting between a sitting US president and a North Korean leader.

The officials, who spoke to Fox News, CNN, CBS and Reuters, indicated that the US president’s aides were given the go-ahead to plan a summit in Singapore after a meeting between US Secretary of State Mike Pompeo and Kim in Pyongyang on Wednesday. At the meeting, which was a part of the ongoing preparations for the much-hyped summit, Pompeo was expected to agree on the date and location with the North.

White House press spokesperson Sarah Huckabee Sanders said on Wednesday that the meeting had been scheduled, but did not elaborate further.

Speaking to the media, Trump promised he would reveal the time and place of the meeting within three days. 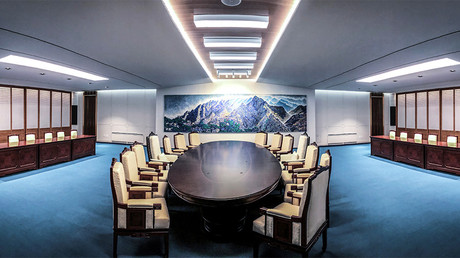 With the chances of the historic meeting actually happening becoming real, speculations over the potential host nation have become rife. Various media outlets named Singapore, Mongolia and even Russia as possible locations. Trump himself fueled speculations late last month, hinting that the Peace House in Korea’s Demilitarized Zone, the venue of the recent inter-Korean summit, might be the best option.

However, on Wednesday, Trump ruled out the DMZ as the location.

Singapore, which, according to media reports, has long made the final cut, was touted by South Korean diplomatic sources as the most likely place for the meeting earlier this week. On Monday, South Korea’s Chosun Ilbo reported that the chances of Singapore hosting the meeting had “increased greatly.”

The meeting, according to a report by Fox News, is scheduled for early June, while Chosun Ilbo reported earlier it would be held in the middle of the month.

Pompeo is bringing three former American hostages freed by North Korea back to the US as a gesture of goodwill in the run-up to the high-level talks, which will come amid a budding thaw in its relations with its neighbor and US ally, South Korea