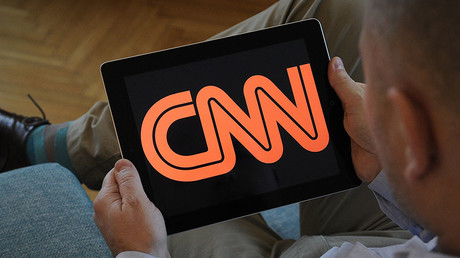 Affiliates of the conservative-leaning Sinclair Broadcast Group shared a YouTube video slamming CNN on their websites. The video is titled: “Did CNN attack Sinclair for doing exactly what CNN has done for years?”

CNN was one of several national broadcasters to criticize Sinclair, after it demanded that its anchors read a script verbatim praising the “quality, balanced journalism” of Sinclair stations, while bemoaning the “sharing of biased and false news” by national media.

The one-minute script quickly went viral, and was described as “Orwellian” and “Propaganda” by veteran CNN news anchor Dan Rather. MSNBC’s Joe Scarborough said: “This looks like something we would mock the Russians for doing during the days of Pravda.”

News anchors looking into camera and reading a script handed down by a corporate overlord, words meant to obscure the truth not elucidate it, isn’t journalism. It’s propaganda. It’s Orwellian. A slippery slope to how despots wrest power, silence dissent, and oppress the masses.

President Donald Trump also stepped in to defend Sinclair, tweeting: “The ‘Fakers’ at CNN, NBC, ABC & CBS have done so much dishonest reporting that they should only be allowed to get awards for fiction!”

The Fake News Networks, those that knowingly have a sick and biased AGENDA, are worried about the competition and quality of Sinclair Broadcast. The “Fakers” at CNN, NBC, ABC & CBS have done so much dishonest reporting that they should only be allowed to get awards for fiction!

Sinclair’s new video hits back at CNN for “dishonesty and hypocrisy.” The video shows CNN reporter Brian Stelter warning audiences about “fake news” in 2015 and 2017, the same warnings issued by Sinclair anchors in their script.

In the video, Stelter calls fake news a “plague” that can mislead viewers and influence elections, before calling on viewers to fight back against misinformation.

“Sinclair agrees, but takes its commitment one step further,” the video says. “Fake news is a problem. Everyone knows it. Calling out Sinclair for calling out ‘fake news’ is dishonest and reprehensible.”

Stelter himself has been accused of spreading ‘fake news’ on several occasions. Last month, Stelter was called out for refusing to correct false claims made by teenage shooting survivor turned gun control activist David Hogg.

Brian Stelter, who hosts CNN’s “Reliable Sources” admitted that he let David Hogg get away with making false claims about firearms on his show last month. https://t.co/T042HZy4Nm

The video closes by accusing CNN of using the Sinclair script story as a hit-piece: “Is it really news that ‘fake news’ is a concern in 2018? Or is this an attack on Sinclair?”

Sinclair Broadcasting owns nearly 200 local television stations across America. The company is awaiting approval for a proposed $3.9-billion merger with Tribune Media, which would expand its reach even further.

Speaking to Fox News, Stelter made the following statement:

“There’s a huge difference between my coverage and Sinclair’s mandatory promos. No one tells me what to say. But these anchors were told exactly what to say. These promos became a story because Sinclair staffers spoke up and said they were uncomfortable. They said they’d never seen anything like this before.”