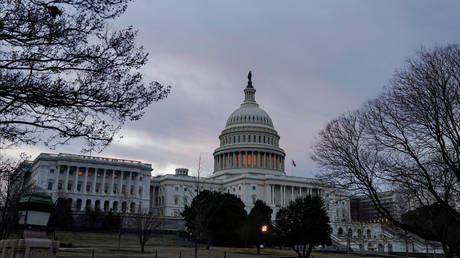 The partial shutdown of the federal government cost the US economy $11 billion, according to analysis from the Congressional Budget Office (CBO), almost double the $5.6 billion President Trump had requested for a border wall.

Beginning on December 22, the latest government shutdown dragged on for 53 days, and saw around 800,000 federal workers miss their paychecks. The government reopened on Friday, after Trump and Congressional Democrats failed to reach a deal on the $5.7 billion Trump had requested for his long-promised Mexican border wall.

During that time, the US economy suffered to the tune of $11 billion, according to a CBO report. While much of that loss will be recovered, the CBO estimates that $3 billion is permanently lost. The loss was due to delayed government spending, lost output from federal workers and reduced demand.

Also on rt.com
The political theater of Roger Stone and Kamala Harris & the human cost of govt shutdowns (E888)


Earlier analysis from Standard and Poor’s claimed that the US economy lost $6 billion during the shutdown, stemming from loss of productivity and economic activity lost to outside business.

Trump’s proposed border wall, which was outright rejected by Democratic leaders Chuck Schumer and Nancy Pelosi, would have cost $5.7 billion, just under half the money lost during the shutdown. Schumer and Pelosi rejected the wall during several rounds of negotiations, even when the proposal was bundled with a three year amnesty for DACA recipients already in the US.

Trump has promised to press ahead with building the wall, “with or without the Democrats,” White House press secretary Sarah Sanders said on Saturday. If the president cannot reach a deal with Schumer and Pelosi in the next three weeks, the government will shut down again on February 15.

However, Trump has vowed to avert another shutdown by invoking emergency powers to build the wall.

“I will use the powers afforded to me under the laws in the Constitution of the United States to address this emergency,” he warned Congress on Friday, adding in a tweet that “if no deal is done, it’s off to the races!”

I wish people would read or listen to my words on the Border Wall. This was in no way a concession. It was taking care of millions of people who were getting badly hurt by the Shutdown with the understanding that in 21 days, if no deal is done, it’s off to the races!