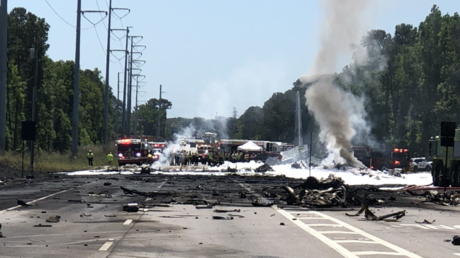 At least five people were killed when the cargo plane crashed along a road near the Savannah/Hilton Head International Airport at around 11:30 am. The Puerto Rico Air National Guard plane was involved in a training mission when the crash occurred.

Business owner Scott Cohen posted footage of the crash that was captured on a CCTV camera. “Prayers go out to the families of all on board the plane that crashed in Garden City today,” he said on Twitter.

The footage shows the plane slowly tipping over and falling out of the sky before a huge column of black smoke billows into the air.

Nine people were on board the plane, according to Sgt. Noel Velez of the Georgia National Guard. Authorities have yet to confirm the number of fatalities or injuries. However, a National Guard told the AP that at least five people have died.