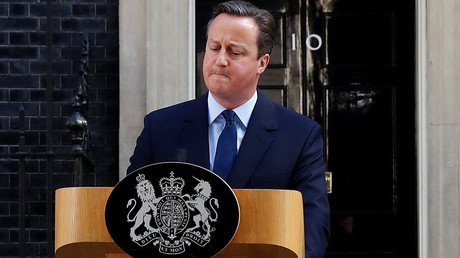 Following David Cameron’s revelation that he will step down as prime minister within three months of the Brexit vote, British politicians from both sides of the fray have reacted to the news.

Many MPs took to Twitter to praise Cameron’s “dignified” concession speech and express regret over his resignation.

Dignified & moving speech from @David_Cameron committing to honour the result & setting out timetable for stepping down.

Stunned & deeply saddened that David has decided to resign.
Simply lost for words. Need leadership more now than ever before @David_Cameron

Cameron said he wants a new PM in place by the Conservative Party Conference in October, a decision he says was not “taken lightly”.

READ MORE: Cameron steps down as PM, to leave office by October

David Cameron just spoke with passion, honesty and dignity. He should have the respect of us all. He was every inch a Prime Minister of GB.

David Cameron resuscitated the Conservative Party. Leavers will have to be very careful not to kill it off again.

It’s right that David Cameron has gone. Not a bad man just on the wrong side of the argument.

Cameron easily the worst Prime Minister of my generation. The political mess he has created – and for what? – just incredible.

Labour leader Jeremy Corbyn’s position could also be in jeopardy amid speculation of a party revolt over his leadership during the referendum.

Hearing rumours from Labour source that 55 Labour MPs are set to sign a letter calling for Jeremy Corbyn to go. #EUref

Shadow cabinet meeting at 10am. MPs want them to call on Corbyn to resign.

While Boris Johnson has yet to comment on Cameron’s resignation, he is widely tipped to become Britain’s next PM.

Pretty chaotic scenes there as Boris Johnson leaves his home. Boos from crowd too. Not exactly a glorious dawn.