The Tories’ biggest-ever donor, who once gave the party £5 million ($6.6 million), says Theresa May is a “very bad prime minister” who is doing “very, very badly” on Brexit. He said he’ll only donate again if she’s “kicked out.”

Stuart Wheeler, an 83-year-old multi-millionaire who made his fortune by founding spread-betting firm IG Index, said he would like to see May replaced by backbench Brexiteer Jacob Rees-Mogg. He described the PM’s performance negotiating Brexit with the EU as “very bad.”

Wheeler stated that he would only donate to the party again after May has been removed as leader, or if she changes her approach to the Brexit negotiations. “Assuming Mrs May was kicked out, but only then, unless she completely changes, would I give to the Conservative Party,” he said. 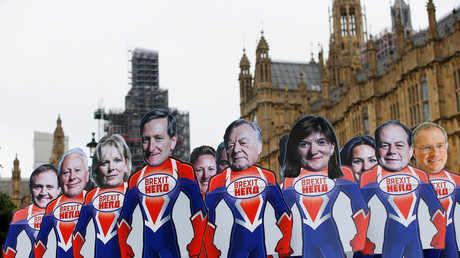 He told Christopher Hope, chief political correspondent at The Telegraph, on a podcast that May “seems to be instructing her negotiating team and instructing herself to give way on absolutely everything” on Brexit.

Wheeler was removed because he declared at the time that he was donating £100,000 ($132,800) to UKIP, who he was intending to support in the subsequent European elections. “I was expelled by email by Eric Pickles (the former Tory shadow minister for communities and local government),” he revealed.

The major financier claims that he is not the only big donor to be disappointed in the PM, and that they too would be willing to give huge cash backing if there were a change of leader.

“There are some major donors who are considerably disappointed with Mrs May who would be far more inclined to give to the Conservative Party if there were a better leader,” he told Hope.

READ MORE: Top Tory donor wants Theresa May replaced by one of Britain’s most unpopular MPs

So, who would Wheeler prefer to take charge of Brexit negotiations as Tory PM? “I’d have Jacob-Rees-Mogg. I know that’s controversial. He drives Bentleys. He wears fancy waistcoats. He went to Eton. He’s very posh. But he’s also highly intelligent. And people trust him,” he said.

It comes after May won her battle over the crucial EU Withdrawal Bill vote on a “meaningful vote” that saw Tory ‘rebels’ crumble away after their threats to disobey the PM – only six Tory ‘rebels’ actually rebelled.

Wheeler described the rebels as “weak.”“They had to give way and they did give way,” he said.