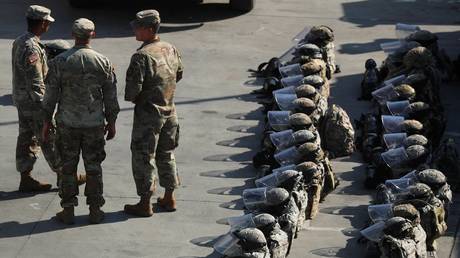 A few thousand US military service members will be sent to the border with Mexico in the coming days, the Pentagon confirmed, as another migrant ‘caravan’ made its way north from Honduras.

“We’ve responded with, you know, here’s how many people it would take,” Shanahan said. However, he would not disclose the exact number. When asked how many troops would be headed to the border, he said “Several thousand, and I’ll kind of leave it at that.”

Also on rt.com
Troops to stay at Mexican border through September – Pentagon


A Pentagon spokesman later followed that up, explaining that the Department of Defense is “currently sourcing the units involved and there will be an increase of a few thousand troops,” and that “we will provide more clarity on the numbers when we have it.”

All the troops are in a “support role” to civilian authorities and not engaged in law enforcement, Shanahan stressed.

President Donald Trump initially ordered almost 6,000 troops to the southern border in late October, as two migrant caravans trekked through Mexico. His critics accused him of a publicity stunt ahead of the November midterms.

Some 3,600 of those troops have since returned to their bases, but 2,300 soldiers still remain on the border. Earlier this month, Shanahan authorized extending their mission through the end of September 2019. Another 2,200 National Guard troops are deployed on the border as well.

That decision came within days of another “caravan” forming in Honduras and setting out for Mexico, with the US as their final destination. According to multiple reports, its numbers have swelled from the original 2,000 members to something like 12,000.

Just so you all know there is a second migrant caravan heading towards the US-Mexico border right now as we speak, but still I see no coverage on it! #CaravanaMigrante

Seeking to crack down on illegal immigration, Trump has vowed to build a border wall along several sections of the border with Mexico, but has been met with determined resistance by congressional Democrats, who refuse to authorize any funds for the purpose. The standoff has led to the recent 34-day government shutdown, the longest in US history.

Congress has less than three weeks to pass a border security bill that Trump would be willing to sign, and there have been no signs of a deal emerging. Reopening the government last week, Trump said he was prepared to invoke a national emergency and redirect Pentagon funding towards wall construction.