Republicans and Democrats in the health committee of the US Senate appear to have reached an agreement on a plan to extend federal payments to health insurers that President Donald Trump had blocked. Trump said he supported the plan.

The plan agreed to by Senators Lamar Alexander (R-Tennessee) and Patty Murray (D-Washington) is intended to stabilize health insurance markets under the Affordable Care Act.

“This takes care of the next two years,” Senator Alexander told the New York Times. “After that, we can have a full-fledged debate on where we go long-term on healthcare.”

Alexander and Murray had been working for weeks on healthcare legislation separate from efforts by GOP leaders to dismantle the ACA, according to AP.

As one part of the deal, in addition to the the subsidies to health insurance marketing being funded for two years, there would be lower out-of-pocket costs for low-income consumers.

At a joint press conference by Trump and Greek Prime Minister Alexis Tspiras on Tuesday afternoon, the president said he knew about the Alexander-Murray deal.

“It is a short-term deal, a solution for a year or two that will get us over this hump, so we don’t have this dangerous period,” Trump said.

The president endorsed the plan by Senators Graham and Cassidy, which would provide block grants to states to provide their own health insurance programs, as a better long-term solution.

He also called Obamacare “everything but dead,” apparently unaware that the expression meant that it’s alive and well.

Under the 2010 healthcare overhaul, the government had to pay insurers for reducing out-of-pocket expenses for lower-earning customers. The so-called cost sharing reductions cost around $7 billion this year and lower expenses like co-payments and deductibles for more than 6 million people. 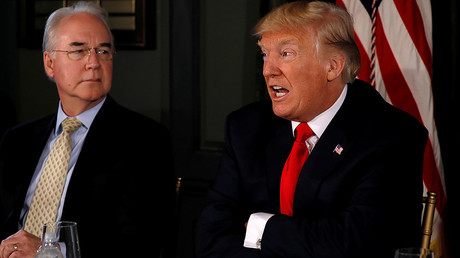 Although a federal judge ruled that Congress hadn’t legally appropriated the payments, the Obama administration continued to make them. Trump kept up the payments for almost nine months, until he ordered them discontinued last week.

Trump halted the insurers’ payments last week but said he wanted a bipartisan deal to continue them temporarily. Trump and many Republicans consider the payments to insurers “bailout to carriers.” Insurers have warned that premiums will rise unless the payments were restored.

In exchange for the congressional deal, Republicans want Congress to give states flexibility to avoid some coverage requirements under President Obama’s flagship healthcare law.

Alexander, who chairs the Senate Health Committee told reporters the next step will to win enough support from colleagues to put the proposal to a vote.

Previous efforts by Congress to repeal and replace Obamacare have repeatedly failed, with Democrats united in opposing any such proposal and several dissenting Republicans joining them.