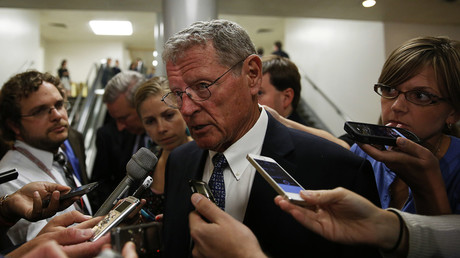 A Republican senator who chairs the Senate Armed Services Committee bought thousands of dollars-worth of stock in arms manufacturer Raytheon after pushing the Trump administration to approve massive hikes in defense spending.

Senator James Inhofe of Oklahoma purchased between $50,000 and $100,000 of Raytheon stock last Tuesday – just days after news broke that US President Donald Trump had decided to back plans to request $750 billion from Congress for defense spending for the fiscal year 2020.

1. Sen. Inhofe pushed for record defense spending
2. Inhofe bought tens of thousands of stock in a defense contractor
3. Inhofe’s office was asked about the purchase
4. Inhofe dumped the stockhttps://t.co/DuZG6S9t9J

It seems that Inhofe was personally involved in the decision to hike the defense budget, too. When Trump suggested last week that he wanted to downsize parts of the US defense budget, Inhofe met with him and Defense Secretary James Mattis – a meeting which seems to have successfully convinced Trump to back increases in defense spending rather than cutbacks.

Inhofe’s communications director, Leacy Burke, told the Daily Beast, which first reported on the senator’s stock buy, that his financial transactions are “handled by a third-party advisor” and that he was not aware of the stock transaction. Burke said Inhofe had told his financial advisor to reverse the transaction when he learned of it. “This means that the transaction was canceled before it was settled; the Senator never took ownership of it,” she said.

The staffer also said Inhofe had written to his financial adviser instructing him not to buy anymore aerospace or defense stocks in future, given his position as the new chairman of the Armed Services Committee – but metadata on the letter provided by Burke showed that the letter was created less than 20 minutes after the Daily Beast contacted Inhofe’s office for comment on the stock purchase.

It appears that this was not the first time Inhofe owned stock in companies “within his direct legislative purview” either, the website reported. When he chaired the Senate Environment and Public Works Committee between 2015 and 2017, Inhofe owned stakes in multiple energy companies.

The stock buy has raised ethics concerns, with experts saying it highlights the conflict of interest that exists when elected officials’ financial interests are tied up in industries they have control over in the form of enacting or stopping legislation.

Also on rt.com
Trump warned of ‘disaster’ if he makes cuts to 2020 defense budget


Lawmakers are not allowed trade stock based on non-public information, but since the news of Trump’s defense spending request was already public, Inhofe’s short-lived Raytheon purchase would not have been classed as congressional insider trading, even if he had directed the purchase himself.

Still, one expert said the senator “likely has other nonpublic inside information, such as insight into what the final budget will look like and which industries stand to benefit.”