Late into the night, the Senate passed the Republican bill to rewrite the American tax code. This marks the last major hurdle before the bill becomes law. Democrats complained they weren’t able to read the bill, as Republicans added handwritten amendments.

The tax reform bill was passed by a vote of 51-49, with Senator Bob Corker (R-Tennessee) the only Republican voting against. It must now be reconciled with the version passed by the House. The bill is expected to become law before the end of the year, which would make it the first major piece of legislation the Trump administration has been able to get through Congress.

Before the final vote, Senate Minority Leader Chuck Schumer (D-New York) made “one final plea,” calling for a motion to adjourn until Monday to allow Democrats to read the last-minute provisions. The motion failed with a 52-48 vote along party lines. Schumer said that the Republicans did not have the “decency” or “honor” to let the Democrats see the amendments before lobbyists. He added that Democrats only got to see the bill with a “few hours’ notice,” and it had “not been read fully or considered fully” by “a single member” of the chamber.

“In my long career in politics, I have not seen a more regressive piece of legislation, so devoid of a rationale, so ill-suited for the condition of the country, so removed from the reality of what the American people need,” Schumer said, adding that the Republican party “will never again be the party of tax cuts.”

Schumer said that the text of the bill was replaced by unreadable handwritten notes that were “scrolled like something on the back of a napkin behind closed doors.”

“Read the bill? They’re still writing it by hand,” Schumer chided Republicans, adding that they were “reaching unreached heights of hypocrisy” after complaining about the way Democrats handled the Obamacare vote in 2010. Schumer saluted Corker for voting against the bill, adding that his only regret was that “there were not more that followed his example.”

Senator Bob Menendez (D-New Jersey) proposed an amendment that would restore the full State and Local Tax (SALT) deductions from being eliminated. The amendment failed in a 52-48 vote. Senators Marco Rubio (R-Florida) and Mike Lee (R-Utah) proposed an amendment to raise the corporate tax rate from 20 percent to 22 percent in order to make the child tax credit refundable against payroll taxes. The amendment was voted down 71-29.

On Friday, Senate Majority Leader Mitch McConnell (R-Kentucky) announced that he “has the votes” to pass the bill.

Republicans could only afford to lose two votes from their caucus, or the bill would have failed.

Senator Bob Corker (R-Tennessee) said Friday that he would not vote for the tax plan, making him the only Republican that said he would oppose the bill before the vote. Corker previously promised that he would vote against any bill that hiked the deficit, and said that he was keeping his promise by refusing to vote for the legislation.

“I am not able to cast aside my fiscal concerns and vote for legislation that I believe, based on the information I currently have, could deepen the debt burden on future generations,” Corker said in a statement.

All the other senators who previously voiced opposition to the bill came out before the vote to say they would support the bill. Senator Susan Collins (R-Maine) released a statement on Friday, saying that she would vote for the bill after securing “key improvements in the bill.”

Collins tweeted a picture of a letter from McConnell, who assured her that there would be no future cuts to Medicare.

“As revised, this bill will provide much-needed tax relief and simplification for lower- and middle-income families, while spurring the creation of good jobs and greater economic growth,” Collins said in a statement.

Senator Jeff Flake (R-Arizona) also said Friday he would support the bill after Senate leaders agreed to eliminate an $85 billion “expensing budget gimmick” and the administration told him they would work with him on to enact “fair and permanent protections for DACA recipients.”

“Having secured both of those objections, I am pleased to announce I will vote in support the tax reform bill,” Flake said in a statement.

During the week, Senators Lisa Murkowski (R-Alaska), James Lankford (R-Oklahoma) and John McCain also said that they would support the bill.

After McConnell announce he had enough votes, Republicans delayed the vote several times to make last-minute changes to the bill as Democrats debated on the Senate floor.

Senator Ron Wyden (D-Oregon) presented a list of more than 30 provisions, which he said were introduced to the bill just before he received them. Wyden said that the additions were written by lobbyists “in the last few hours, or perhaps overnight.”

This is so bad. We have just gotten list of amendments to be included in bill NOT from our R colleagues, but from lobbyists downtown. None of us have seen this list, but lobbyists have it. Need I say more? Disgusting. And we probably will not even be given time to read them. pic.twitter.com/Mn0i56JeZg

“It sure seems like the lobbyists were working overtime. They must have earned a holiday gift with this new bonanza of goodies,” Wyden said. The senator from Oregon added that they were still waiting to see the final version of the 500-page bill only hours before they would cast their votes.

I was just handed a 479-page tax bill a few hours before the vote. One page literally has hand scribbled policy changes on it that can’t be read. This is Washington, D.C. at its worst. Montanans deserve so much better. pic.twitter.com/q6lTpXoXS0

Trump tweeted earlier Friday that Republicans were “working hard” to write amendments that would make the bill “better and better” and blamed Democrats for being obstructionists.

“Dems trying to block because they think it is too good and will not be given the credit!” Trump tweeted.

Republicans Senators are working hard to pass the biggest Tax Cuts in the history of our Country. The Bill is getting better and better. This is a once in a generation chance. Obstructionist Dems trying to block because they think it is too good and will not be given the credit!

Senator Jeff Merkley (D-Oregon) blasted the GOP for adding the provisions at the last minute, demanding an answer to why the bill was “being circulated to lobbyists, to the swamp instead of to the members of the United States Senate?”

Senator Dick Durbin (D-Illinois) brought out one page of the bill had a handwritten note that changed the rules for Subchapter S Corporations. However, no one was able to read the note.

“I defy anybody to read it because the problem is when they copied it they chopped off-line so there aren’t sentences. There are just little phrases and words,” Durbin said. “This is your United States Senate at work. This is what happens when you push through a bill late at night desperate to pass it without really stopping to ask yourself will this make us a stronger nation?”

Senator Bernie Sanders (I-Vermont) said that lobbyists were “looting” the federal treasury in the form of these last-minute hand-written amendments.

“As we speak, there are lobbyists all over Capitol Hill writing down in handwriting amendments to this bill to give hundreds of millions if not billions of tax breaks, billions of dollars in tax breaks to large corporations,” Sanders said. “As we speak they’re probably still writing those amendments.”

Historians will look back on Dec. 1, 2017 and conclude this was one of the great robberies in US history because Republicans are looting the Treasury.

Sanders said that Republicans were planning to cut social security, Medicare and Medicaid after the tax bill passed and the deficit goes up.

“In other words, in order to give tax breaks to billionaires and to large profitable corporation, they’re going to cut programs for the elderly, the children, the working families of this country, and the poor,” Sanders said. “This legislation will go down in history as one of the worst, most unfair pieces of legislation ever passed.” 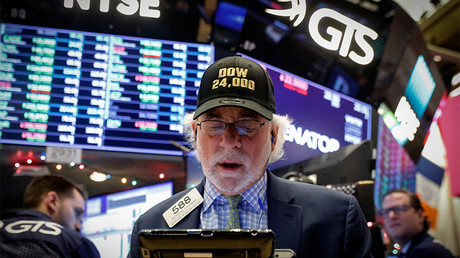 Senator Pat Toomey (R-Pennsylvania) fired back, saying that the bill went through “the regular order.”

Toomey said that Republicans “might” even win the support of Democratic Senator Joe Manchin (West Virginia). However, Manchin said that the bill “not designed to have one Democrat,” and called on Republicans to reach across the aisle.

“I thought that my Democratic colleagues in 2010 that voted for the Affordable Care Act with not one Republican on it was wrong,” Manchin said. “At least they tried. They went through the markups, they went through the hearings. I don’t think any major legislation that affects every American should go through without bipartisan votes and support.”

When Republicans were debating Obamacare in 2009, McConnell argued that Democrats tried to “rush” the bill through Congress “and force it on a country that’s overwhelmingly opposed to it.”

“We need nonpartisan groups like the Congressional Budget Office to tell us how much this legislation will cost and how we’d pay for it, and we need to slow down and get it right. We need to give members of Congress the time they need to understand what they’re going to be voting on. And we need to give the American people the time they need to understand this legislation too,” McConnell said from the Senate floor, according to Senate Republicans.

The legislation will now go to back to the House, where lawmakers will finalize the bill before it is sent to the president’s desk.