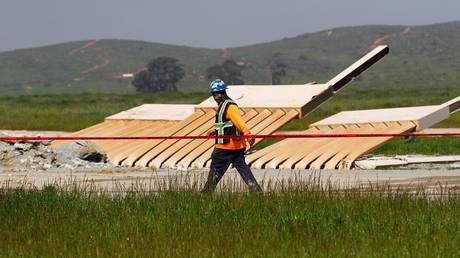 The US Senate has joined the House of Representatives in opposing President Donald Trump’s declaration of emergency on the southern border. Trump said he will veto the unprecedented joint resolution.

The Senate adopted a resolution of disapproval in a 59-41 vote on Thursday afternoon, with twelve Republicans voting alongside the Democrats against what they claimed was usurpation of congressional authority. The Democrat-majority House of Representatives had voted against the emergency on February 26.

Trump’s response came within half an hour, in a one-word tweet: VETO! It is his first veto since he took office two years ago.

I look forward to VETOING the just passed Democrat inspired Resolution which would OPEN BORDERS while increasing Crime, Drugs, and Trafficking in our Country. I thank all of the Strong Republicans who voted to support Border Security and our desperately needed WALL!

Trump declared an emergency last month after Congress agreed on giving him less than $2 billion for building a barrier on the US-Mexican border. The impasse between the White House and the Democrats had previously led to a 35-day partial government shutdown.

Neither the Senate nor the House have passed their disapproval with a three-fifths majority, meaning that Trump will be able to veto their joint resolution and continue the emergency. However, this is the first time Congress has taken up a vote against any presidential emergency declaration, ever since passing the law authorizing the measures in 1976. Since then, there have been 59 emergency declarations, 31 of which are still in effect.