Lindsey Graham’s incursion into the Syrian city of Manbij, where he tried to secure a jackpot by playing the Kurdish card, highlights America’s confusing Mideast policy, but it also brings more trouble to the Syrian stalemate.

As Donald Trump and his lieutenants are locked in attempts to formulate a cohesive Middle East strategy, some of the prominent neocons are busy working on their own prospects for Kurdish-held swathes of Syrian land. Senator Lindsey Graham (R-South Carolina), a close ally of top Washington hawk Senator John McCain (R-Arizona), made a visit to Manbij on Monday as part of his trip to Turkey and Iraq. 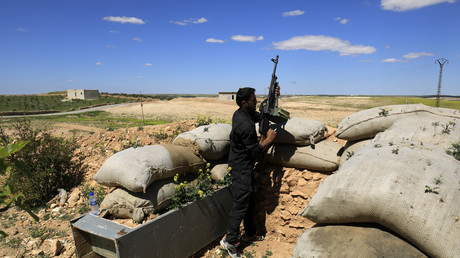 The destination of his Kurdish tour is particularly interesting. Manbij was liberated in 2016 by Kurdish YPG militia – otherwise known as the Popular Protection Units – who defeated the jihadists of Islamic State (IS, formerly ISIS). There were reports that US troops were embedded with Kurdish formations during the offensive as part of America’s overall support of the Kurds.

The success triggered a nervous reaction in Ankara, which accuses the YPG of siding with the Kurdistan Workers Party (PKK) – a Turkey-based militant movement that is considered a terrorist organization by the government. In August 2016, following the takeover of Manbij by the SDF, the Turkish military – an immediate US ally within NATO – launched an operation called “Euphrates Shield” to drive the Kurds out of the city. Just like the US military presence in Syria, the Turkish incursion had dubious legal justification and was repeatedly condemned by Damascus as an act of international aggression.

The US was unresponsive to Ankara’s demands to stop supporting the Kurds. While paying lip service to Turkey as a NATO member and a regional ally, the US continued to provide arms, training and air support to the YPG forces.

Now, if you’re scratching your head wondering what Senator Graham was doing in Manbij – don’t. Reports in Kurdish media give a good idea of what his trip was about. “I will tell President Trump that it is important that we stay here to help you,” he said during an improvised meeting with local leaders.

“You’re friends of the United States, and if we leave it will be terrible,” he said. Manbij is “a place of hope in a region that needs more hope,” Graham added.

Hope? What hope? Here’s a little tip-off provided by the Kurdistan 24 media outlet. “Graham’s delegation also discussed the heroism of the Peshmerga in fighting IS, as well as US military and humanitarian support to the Kurdistan Region,” they wrote. Was it a blow to Trump’s previous intention to withdraw troops from Syria as soon as possible? Now scratch your head.

At some stage of his tour, Graham met with Nechirvan Barzani, the prime minister of the Kurdistan Regional Government (KRG). The US senator (wearing a polo shirt and trainers), presented a sharp contrast to Barzani (dressed in a business suit), but make no mistake – the pair had a lot to do during their discussions.

“Pleased to receive my friend and US Senator Lindsey Graham and his accompanied delegation in Erbil,” Barzani tweeted, noting the meeting revolved around improving “the already excellent ties between the Kurdistan Region and the US.”

Pleased to receive my friend and US Senator Lindsey Graham and his accompanied delegation in Erbil. Improving the already excellent ties between the Kurdistan Region and the U.S. remains a priority of my government. pic.twitter.com/hZQQLNKzI1

Before popping up in Manbij, Graham visited Turkish strongman Recep Tayyip Erdogan, with whom he had “very good, respectful, and candid meeting.” The US and Turkey “have real differences, but far more in common. Turkey needs to be a strategic partner for the US in a win-win fashion,” Graham noted.

We have real differences, but far more in common.

Turkey needs to be a strategic partner for the US in a win-win fashion. pic.twitter.com/mCc3AjWvVW

At the end of the day, the big picture of Graham’s tour is clear – the US is trying to knit together disparate US allies. But what would it bring for Syria – and the region? Graham champions the idea that the US should stay for the long run, while Trump is not so sure. Meanwhile, in Turkey, America is trying – and failing – to guess how to work with stubborn Erdogan and keep the Turks engaged. And as the conflict winds down in Syria, the US military continues to openly support Syrian anti-government groups – some of which are hardcore Islamists – in a blatant contravention of international law.