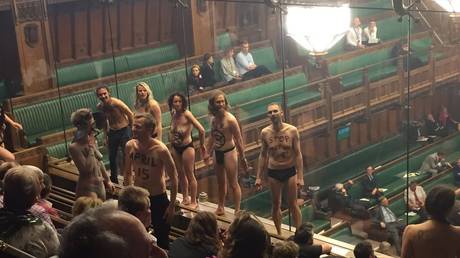 A group of nearly-naked climate change protesters entered the public gallery at the House of Commons, distracting British MPs as they continued to debate Brexit on Monday evening.

The 11 activists from the Extinction Rebellion group were wearing only underwear and had environmental slogans painted on their bodies.

On Twitter, the group said it wanted to call attention to the “elephant in the room” which is the “climate and ecological crisis.”

The protesters stood on a ledge in the public gallery with their backs to MPs who, according to eyewitness reports on social media, tried hard to avoid looking at the scene.

During the Brexit debate the public gallery of the Commons has been invaded by “climate justice” protesters, naked except for thongs. MPs trying very hard not to look, or not to be seen looking

Some Twitter reports said that the activists tried to glue themselves to the glass which separates the public gallery from the chamber below.

One of the activists, 24 year-old wildlife biologist Iggy Fox, told The Sun that she was “tired of the time and resources our government wastes rearranging the deckchairs on the Brexitanic” and that she “won’t stop causing disruption until the government does its duty to protect the people” from climate and environmental disaster.

The protest failed to stop the Brexit debate, however, and police removed the activists from the room.