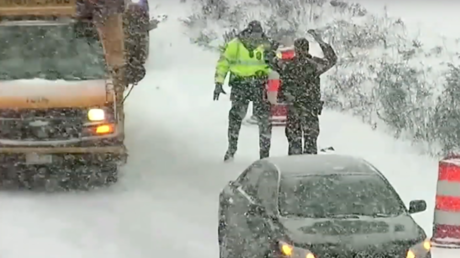 A 31-year-old Minnesotan has claimed that he acted in fear for his life after a CCTV camera caught him pulling over in front of a school bus and shooting its driver in the head in an apparent road rage incident in Minneapolis.

Kenneth Walter Lilly, 31, who works as a security guard, now faces up to 20 years behind bars for firing five bullets at a bus driver during a traffic incident on a packed I35 highway on Tuesday.

CCTV video of the bizarre incident shows Lilly, who is from the city of St. Paul, driving ahead of the bus in slow traffic on a snowy road. Suddenly, the suspect’s vehicle pulls into the hard shoulder. Lilly is then seen stepping out of his car, a black Toyota sedan, and walking back to confront the driver of the school bus. Shortly afterwards, he begins shooting into the windshield with what authorities say was a 9mm semiautomatic handgun.

After firing, the shooter called 911, according to the authorities. The video shows the suspect pacing back and forth, waiting for Minnesota State Troopers to arrive and arrest him.

The school bus driver, whose identity has not been made public, was rushed to hospital. The 78-year-old male is now recovering from non-life-threatening injuries after being shot in the head and left arm. An eight-year-old child seated in the back of the bus at the time of the shooting was unhurt and was reunited with their family.


According to the criminal complaint filed on Thursday, the school bus and the suspect’s car made contact on the freeway as the bus was merging onto the snowy road. Lilly apparently told troopers that he feared for his safety just before discharging the shots, a version of events which authorities quickly dismissed after reviewing footage.

“The filing of the complaint tells you that we do not believe there was a self-defense claim based upon the evidence we have received so far,” Chief Deputy Hennepin County Attorney David Brown told reporters.

The 31-year-old was charged with second-degree attempted murder and second-degree assault with a dangerous weapon. Lilly is set to appear in court on Friday, when prosecutors will request his bail to be set at $500,000.