Dropping horse manure as a Christmas gift to US Treasury Secretary Steven Mnuchin was a Jesus-like act, the man behind the stunt said, comparing the Republicans to Biblical merchants “ripping off the American people.”

Robby Strong, who has claimed responsibility for delivering a gift-wrapped box with horse manure to the Bel Air area where Mnuchin lives, said he took on the example of Jesus, who had “cleansed” the Temple by putting merchants and money changers to flight as they turned the house of God into a “den of thieves.”

“What I did, I would like to compare to what Jesus did when he went into the temple and overturned the tables of the moneychangers, who were exploiting the people financially in the name of religion. I feel like that’s what the GOP has done to the American people,” Strong told KPCC radio.

On his Twitter page, Strong drew another religious parallel, comparing himself to none other than Martin Luther, and his gift of “95 feces” to the 95 theses Luther nailed to the church door of Wittenberg Castle.  “It’s time for another Reformation,” said Strong.

The festively wrapped package raised quite a stink and a stir in the Bel Air neighbourhood when it was discovered by Mnuchin’s neighbour Saturday night, causing a bomb scare and drawing in the Secret Service. Despite it all, no charges have been brought against Strong so far, although the Secret Service reportedly interviewed him.

While the man said he was not expecting to walk free, Strong noted that he couldn’t see anything that would be deemed punishable under the law in his actions. “Is there a law that you can’t drop off a box of poo? Not really,” he said, as cited by Al.com.

And although the festive ‘box of poo’ propelled him into the spotlight, Strong has a history of activism and was an organizer for Occupy L.A. The activist told KPCC he is aware the stunt could spell trouble for him, including with the LA Department of Mental Health, where he works as a psychologist. 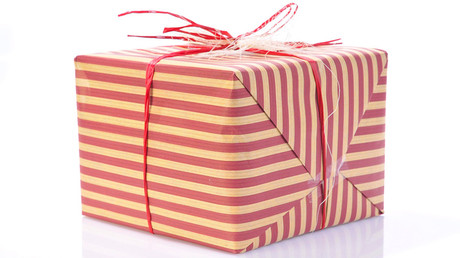 He, however, appeared to show no remorse by saying: “In the long run, if we don’t do stuff like this, what are we going to have left?”

Strong’s “Secret Santa project” has divided opinion on Facebook, with his page flooded with hundreds of both angry and lauding comments. While most lavished praise on Strong for doing “a good job,” some even branding him a “hero,” there were others who slammed the activist for drawing police’s attention away from serious matters.

US President Donald Trump’s $1.5 trillion tax overhaul, which he had branded “an incredible Christmas gift for hard-working Americans,” has drawn ire from Democrats that were hoping, up until the last minute, to kill the landmark legislation. Following the passing of the bill by Congress, Senator Chris Murphy (D-Connecticut) denounced it as a “giant handout for the rich and powerful.”

Apart from being a staunch proponent of the bill, Mnuchin has also come under fire after reports surfaced earlier that he asked for a government jet for his honeymoon.

Strong was very forthright in the Christmas card he attached to the bizzare ‘gift package.’“Dear Misters Trump and Mnuchin, we are returning your Christmas gift of the Republican tax plan because it’s complete horse s**t. Sincerely, the American people.”