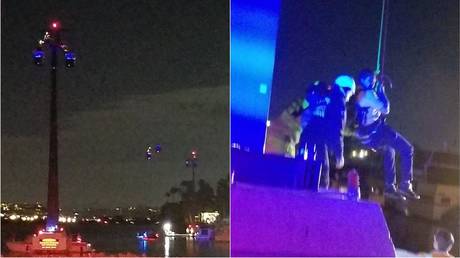 A trip to SeaWorld in San Diego reached terrifying heights for 16 people who became trapped 80 feet in the air when a ride malfunctioned, leaving them suspended for almost four hours as rescue crews scrambled to free them.

The Bayside Skyride stopped working after a massive gust of wind tripped its circuit breaker on Monday night, leaving between 15 and 30 people trapped in five gondolas, with some suspended up in the sky.

The Bayside Skyride is a gondola ride that takes passengers from one side of Mission Bay to the other suspended 80 feet (24m) above the water.

The passengers were trapped for almost four hours after the device malfunctioned at about 7:20pm. Sixteen people had to be rescued, San Diego police said. One of those trapped was an infant and at least seven were juveniles. There was also a partially paralyzed passenger who had suffered a stroke last year.

Stranded at #SeaWorld:
Emergency crews working to get multiple people down who are stranded in gondolas. SDPD says they got a call a huge gust of wind tripped a circuit breaker. A father stranded with his son says wind gust hit, cable shook violently & gondola stopped #NBC7pic.twitter.com/zc1ymkHH7g

Rescue workers managed to get the passengers down with harnesses and they were put in lifeguard boats and then examined by medical crews. SDFRD reported everyone was rescued safely by about 11pm.

SeaWorld for its part announced it would “conduct a thorough inspection of the ride prior to re-opening,” and apologized for the inconvenience caused.