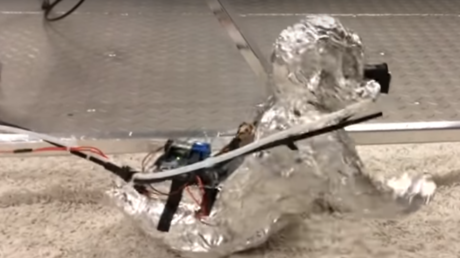 A baby-shaped tin foil monster slowly drags itself across a filthy carpet. No, not a scene from a horror film – it’s an experiment designed by scientists to gauge how much dirt infants collect as they crawl across the floor.

Researchers at Purdue University in Indiana created the miniature robot to study how much dirt, pollen, bacteria, and other “bio junk” is collected by crawling infants.

Using data gathered by the creepy little robot – whose body is a Frankensteinian concoction of a legless baby doll wrapped in tin foil – the researchers found that concentrations of harmful particles are about twenty times denser closer to the ground than they are higher up. When babies crawl, they inhale all sorts of unhealthy particles, which can lodge themselves in the deepest regions of their lungs.

However, imprisoning your infant in a sterile bubble may not be necessary.

“Many studies have shown that inhalation exposure to microbes and allergen-carrying particles in that portion of life plays a significant role in both the development of, and protection from, asthma and allergic diseases,” lead researcher Brandon Boor said in a statement published in the journal Environmental Science and Technology.