Is the ‘special relationship’ between the US and UK still on the rocks? Insiders say that Trump is frustrated by UK PM Theresa May’s leadership style, urging her to focus on policy and to stop worrying about offending people.

Officials have told the Telegraph that US President Donald Trump reprimands May during phone calls. He has allegedly told her off over focusing on wider conversation in lieu of policy. Trump is reportedly also becoming increasingly annoyed with the UK’s prime minister as the president feels that May’s demands on him are taking advantage of the UK-US special relationship – a partnership that was forged in the Churchill days and has lasted through till modern times. 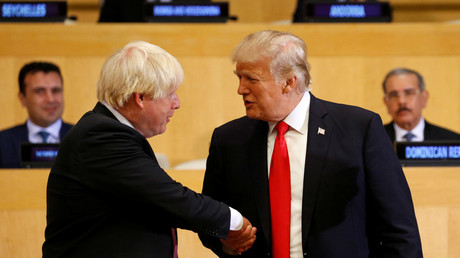 A former White House official said that face-to-face meetings between May and the president were not any friendlier. “No offence, but she is basically a school mistress. I’m not sure anyone gets on well with her,” the official said.

The comments coincide with other claims in a report by the Washington Post, which claims that Trump has hit out at May’s “political correctness” in private, stating that May is too worried about offending other people.

Theresa May has hit back at Trump’s reported comments. “I just get on and make sure that I’m delivering,” she said. “That’s the job of any politician.”
Trump’s comments come ahead of a G7 summit where the growing trade battle between the US and some of its closest allies will take center stage of crunch talks.

The US president angered world leaders when he imposed hefty trade tariffs on steel and aluminum. Theresa May slammed the new tariffs, stating that they were “unjustified.”
“I made my views clear of the steel and aluminium tariffs,” she said. “We disagree with these, we think they are unjustified. Obviously, the EU will be responding.

“We will be working with other in the EU to ensure that response in proportionate, that it is within WTO rules. I will continue to put the argument for the importance of those trade relationships around the world.”

May and Trump also clashed recently over other issues, such as Trump tweeting videos of the far-right Britain First group, and relocating the US Embassy in Israel from Tel Aviv to Jerusalem.

Trump is set to visit the UK in a July visit where he will meet the Queen, enjoy a jaunt around his Scottish golf course, and presumably face off with protesters already vying to speak out against the president during his UK stay.