Seeking to soothe feathers ruffled by comments from the US ambassador to Berlin, State Department spokeswoman Heather Nauert only made it worse by citing the Allied landings in Normandy as an example of US ties with Germany.

Nauert’s choice of D-Day as an example raised eyebrows at CNN and MSNBC, but also among those who know a thing or two about the Second World War. The landing of some 150,000 US, British, Canadian and other Allied troops on the beaches of German-occupied France 74 years ago was certainly part of a “long history” between the US and Germany, but hardly a good illustration of a “strong relationship.”

Yes, because D-day was all about liberating Germany from the iron grip of the French, right, Ms. Nauert?

The bumbling answer came after a barrage of questions were asked about statements made by Richard Grenell, the recently-appointed US ambassador to Germany. In an interview with Breitbart published on Sunday, Grenell said that conservatives from all over Europe told him there was a feeling of resurgence following the election of US President Donald Trump.

“I absolutely want to empower other conservatives throughout Europe, other leaders. I think there is a groundswell of conservative policies that are taking hold because of the failed policies of the left,” he said, adding that Trump’s election has “empowered individuals and people to say that they can’t just allow the political class to determine before an election takes place, who’s going to win and who should run.” 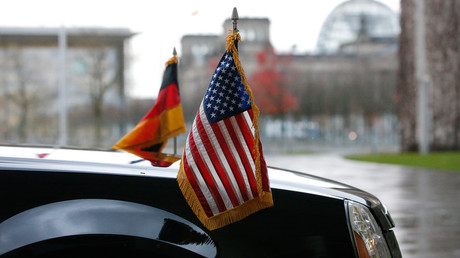 Grenell himself denied that this amounted to an overt endorsement of any particular person or political party, while Nauert argued that ambassadors have freedom of speech, just like any other American.

“Look, we’re not supporting any political party. That’s not what we do. We support democracy. We support countries figuring out for themselves who they want to vote in for office,” Nauert said, apparently ignoring the long history of US meddling in other countries’ elections, “color revolutions” and forcible regime change.

Grenell has been the US envoy to Berlin for less than six weeks, but he has already managed to offend the Germans by demanding they cease trading with Iran after Trump announced the US would unilaterally abandon the 2015 nuclear deal.

Nauert also had to defend US Ambassador to Israel David Friedman, who told reporters covering the deadly protests along the border with Gaza to “just keep your mouths shut until you figure it out.”

Friedman was “explaining his opinion that some in the media, not all, but some in media organizations have not done that balanced job of reporting,” Nauert argued, blaming the Islamist organization Hamas for the casualties in Gaza.

While Grenell and Friedman’s words have attracted attention as unusually undiplomatic, they are hardly the first US diplomats to meddle in the affairs of host countries or even order their governments around. Ambassadors to Belgrade, Sarajevo and Skopje have done so repeatedly. In January, for example, US Ambassador to Kosovo Greg Delawie threatened “specific and harsh consequences” to the ethnic Albanian government running that renegade Serbian province if they passed a law that Washington did not approve of.