Internet users have been flooded with ads for Saudi Crown Prince Mohammad bin Salman’s UK trip. Instead of fostering positivity, however, the ads are being used as a way to condemn the prince for his alleged war crimes in Yemen.

The ads have been spotted on Twitter and Reddit. So far, the reception to the Saudi royal’s visit has been largely hostile, with the prince widely slammed for his complicity in the war on Yemen. Some activists are even calling for him to be arrested upon arrival in the United Kingdom to face trial for his alleged war crimes.

Using the hashtag #Welcome_saudi_crown_prince – because who doesn’t love an underscore in a hashtag – the ads are trying (and failing) to promote a positive narrative about the prince’s trip. Those who have spotted the ads are mostly slamming the prince and his government, labeling the targeted promotion of the prince’s UK visit as “fake news.”

The definition of “astroturfing”

1. The deceptive practice of presenting an orchestrated marketing or public relations campaign in the guise of unsolicited comments from members of the public.

Prince Mohammad will touch down in the UK on Wednesday and will leave on Friday. Mass protests by a coalition of activist groups have already been organized at Downing Street for Wednesday. The protests will call out both the prince for his alleged war crimes in Yemen, and the UK government for its ‘complicity’.

One of the groups that will attend the protest, Human Rights for Yemen (HRY), spoke to RT about the prince’s role in the Yemen war. HRY Director Kim Sharif said that Saudi forces are committing war crimes and violating the Geneva Convention with impunity.

Can’t recall seeing something like this before. Saudi Arabia buying online ads to promote crown prince’s visit to the UK this week pic.twitter.com/HYfbsFjc3F

“There is jurisdiction in the UK to try war criminals and there is no immunity for such crimes, irrespective of where they have been committed,” she said. “Salman is ultimately responsible for these crimes and he must be arrested for war crimes during his anticipated visit to the UK soon.”

More than 20 million people have been left aid-dependent due to the conflict, according to UN Refugee Agency (UNHCR) figures. Some 11.3 million people are in “acute need” and urgently require assistance to survive. 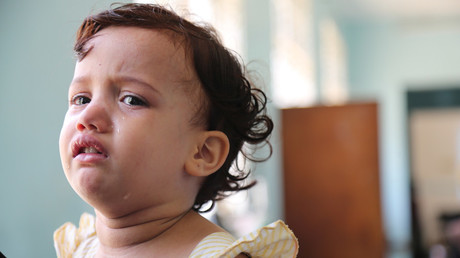 The Saudi-led coalition imposed a complete blockade on the port of Hodeidah in November after Houthi rebels, who control areas across northern Yemen, fired ballistic missiles against targets in Saudi Arabia. The port closure meant that whole communities were at risk of death by starvation, as critical food and medical aid were prevented from entering Yemen. Saudi forces began to ease the port blockades at the end of December, but humanitarian sources report that it is still difficult to get food, medicine, fuel and other critical supplies into Yemen.

The conflict has created the largest food security emergency in the world, and led to a cholera outbreak that has affected nearly one million people since April. Other data shows that 130 children die of malnutrition and disease every day because of the blockade.

The UK government has come under attack for its significant arms deals with the Saudis. Under UK law, weapons should not be exported “if there is a clear risk that the items might be used in the commission of a serious violation of international law.” Government data shows that the UK has licensed £4.6 billion (US$6.3 billion) worth of arms to the Saudis since they began bombing Yemen in March 2015.