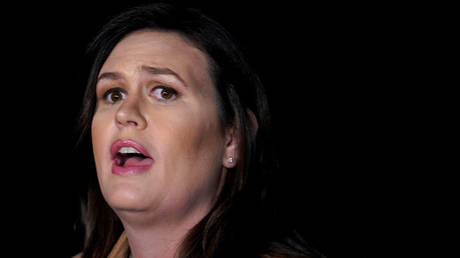 White House press secretary Sarah Sanders has been interviewed by special counsel Robert Mueller’s office – reportedly one of the last interviews of the two-year probe seeking evidence of Russian collusion with US President Trump.

“The President urged me, like he has everyone in the administration, to fully cooperate with the special counsel,” Sanders told CNN. “I was happy to voluntarily sit down with them.”

Anonymous sources claimed the White House did not initially want Sanders speaking to Mueller’s office, and it’s unclear what she was asked. Special counsel spokesman Peter Carr declined to comment.


Another source told the Washington Post that Sanders was interviewed by Mueller seven months ago. She was reportedly interviewed at around the same time as former White House chief of staff John Kelly, who left the Trump team in December.

With the Mueller investigation winding down in the coming months and no evidence of collusion in sight, investigators are reportedly focusing on discrepancies between President Donald Trump’s public statements and those of his team, according to sources cited by CNN, who believe the special prosecutor may attempt to frame any misleading statements to the press or public as obstruction of justice – even though the statements weren’t made under oath or directly to investigators.