If Ankara buys the Russian-made S-400 anti-aircraft system, it would be catastrophic for the US and could imply a break-up with Turkey, a newly-picked assistant secretary of state told US lawmakers during confirmation hearings.

The pessimistic outlook on Washington’s quarrel with Ankara over the Russian weapon system came from René Clarke Cooper, nominated to be the assistant secretary of state for political-military affairs. Cooper spoke to the Senate Foreign Affairs Committee on Wednesday to convince them he is the right man to assist Secretary of State Mike Pompeo. 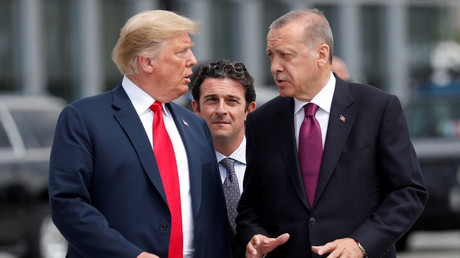 At one point, Senator Jeanne Shaheen (D-NH) asked about the Russian-Turkish deal and US move to bar supply of F-35 fighter jets in retaliation.

He conceded that if the long-standing cooperation between Turkey and the US were to be broken apart, it would be catastrophic too.

Cooper spoke hours before the White House announced sanctions against two Turkish ministers as part of the stand-off over Pastor Andrew Brunson, a US citizen held in custody by Ankara over his alleged support of the 2016 botched military coup. Turkish interior and justice minister were slapped with sanctions as Washington deemed them responsible for the detention of Brunson and violations of human rights. Ankara has previously vowed to respond with counter-sanctions.

US officials have repeatedly stated that Turkey’s purchase of the Russian long-range air defense system was against NATO’s interests and compromised the alliance. The 2019 National Defense Authorization Act passed in the Senate on Wednesday bars the supply of the advanced F-35 jets until the Pentagon and the State Department produce a report on US “military and diplomatic presence” in the country and the possible consequences of removing Turkey from the F-35 program altogether.