Hoping for an easy interview on Alabama’s ‘strong connection’ with Israel, the Donald Trump-endorsed-but-failed Senate nominee Roy Moore was the latest dupee of comedian Sacha Baron Cohen, falling foul of a ‘pedophile detector.’

Former Alabama Chief Justice Moore was unwittingly filmed as part of Cohen’s new show, ‘Who is America?’ Moore’s 2017 bid for the Senate was hampered after a slew of sexual misconduct allegations were made against him, the youngest alleged victim being 14 at the time of the incident. 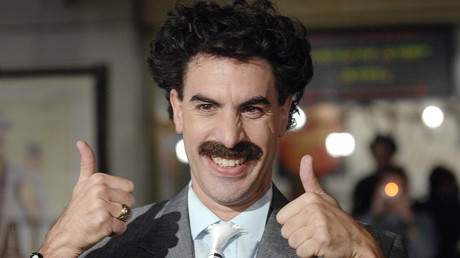 Moore, who has continued to be plagued by the allegations in the media, faced questions from his “Israeli interviewer” – none other than actor Sacha Baron Cohen, widely known for his characters ‘Borat’ and ‘Ali G.’

Posing as “terror expert” Colonel Erran Morad, Cohen asked Moore why there was such a “strong connection” between Alabama and Israel. The right-wing politician responded by lauding the state’s values of freedom and liberty.

“Alabama has always been a state that valued freedom, valued liberty, and appreciated what people went through to get it,” he said.

When Cohen commented with a hidden sarcasm that in Alabama, “people have always been free, whatever their religion, or race, or sexuality,” Moore stated: “It’s part of our heritage.”

But Moore’s hopes for an easy ride then took a somewhat uncomfortable turn when Cohen’s interview focused on Israel’s tradition in technological innovation.

Erev Tov, I was honored that ladies man Roi Moore took time away from his busy schedule of hanging round shopping malls to talk to me. https://t.co/WYnPOqN7ad

Using technology first developed to detect Hamas “terror tunnels,” Cohen brandished a “simple to use” and “99.8 percent accurate” device that beeps when waved over pedophiles. Assuring Moore that as “neither of us are sex offenders, then it make absolutely nothing,” Cohen gave a demonstration. He first waved it over himself before turning to Moore, where it promptly beeped.

Several back and forths ensued with Cohen claiming “it must be faulty” and “it’s malfunctioning.” Having enough, Moore suggested “maybe Israeli technology hasn’t developed properly,” before cutting the interview.

“I support Israel, but I don’t support, this kinda stuff,” he added before leaving to a beeping detector.

Moore gained the Republican nomination for a 2017 special election to replace Attorney General Jeff Sessions but lost out to Democrat Doug Jones. Previously, he had come under fire for his role as chief justice. He was suspended from the position in 2016 for refusing to adhere to a Supreme Court ruling on same-sex marriage. Moore’s comments on race, LGBT issues, and Islam have also caused some controversy.

While Moore has threatened legal action against Cohen over the provocative stunt, social media has seemed to find the funny side since the cringey interview first aired Sunday.