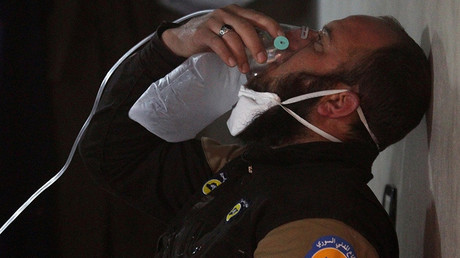 Condemning the chemical weapons attack in Idlib province, US Secretary of State Rex Tillerson accused the Syrian government of “barbarism” and said Russia and Iran also bear moral responsibility for the deaths.

In a statement of Tuesday afternoon, Tillerson pointed the finger at Damascus, saying that “it is clear that this is how Bashar Assad operates: with brutal, unabashed barbarism.”

“Anyone who uses chemical weapons to attack his own people shows a fundamental disregard for human decency and must be held accountable,” Tillerson said.

He called on Russia and Iran to exercise their influence over Damascus “to guarantee that this sort of horrific attack never happens again,” and said that they “also bear great moral responsibility” for the deaths, as self-proclaimed guarantors of the Syrian ceasefire.

The attack on the town of Khan Sheikhoun reportedly killed 58 people, including 11 children under the age of eight, according to the UK-based Syrian Observatory for Human Rights and the US/UK-sponsored ‘White Helmets’ rescue group.

The Syrian army has denied allegations that it was behind the attack.

“We deny completely the use of any chemical or toxic material in Khan Sheikhoun town today and the army has not used nor will use in any place or time, neither in past or in future,” the army said in a statement quoted by Reuters.

The Russian air force did not conduct any airstrikes in the Idlib Governorate.

“Based on the reports it might be that the Syrian Army targeted a place that was used as a chemical weapons factory or that stocked chemicals by the rebels,” Jamal Wakeem, a professor of history and international relations at the Lebanese University in Beirut, told RT.

Wakeem said he doesn’t believe the Syrian Army would be so “desperate” as to use chemical weapons, given the fact that it has been “achieving major success on various fronts.”

He went on to state that although rebels have previously accused the Syrian government and Russian military of using chemical weapons, that news “turned out to be false,” noting that there was instead evidence that rebels had used chemical weapons in Syria and Iraq.