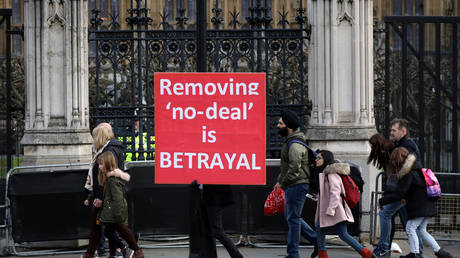 A Tory cabinet minister has warned Prime Minister Theresa May that she and other government colleagues are ready to resign if a ‘catastrophic’ no-deal Brexit is not ruled out.

Margot James, the digital minister, claims she and fellow ministers Richard Harrington and Claire Perry are ready to walk out if the prime minister fails to extend Article 50 to avoid the UK leaving the EU without a deal on March 29.

James, speaking on BBC Radio 4’s Today program, warned: “All of us are agreed that we couldn’t be part of a government that allowed the country to leave the European Union without a deal.”

Asked whether she was prepared to quit, or be sacked, James said: “If it comes to that, yes.”

May is due to give a statement to the House of Commons on Tuesday to update MPs on the status of Brexit negotiations with the EU after a weekend summit in Egypt’s Sharm el-Sheikh. James hopes the prime minister will offer key concessions, including extending Article 50 to counter the threat of cabinet resignations.

READ MORE: Admission of failure? May postpones Brexit vote for 2 weeks, sparks resentment both in EU & at home

The prime minister faces the prospect of widespread rebellion on Wednesday from Tory MPs on an amendment tabled by Conservative Oliver Letwin and Labour’s Yvette Cooper that would effectively rule out a no-deal Brexit.

May has faced criticism from both politicians in London and Brussels after she rescheduled a “meaningful” vote on Brexit in the Commons that could take place as late as March 12 – just two weeks before the UK is due to leave the union.


It comes as Labour leader Jeremy Corbyn announced on Monday that his party will either table or support an amendment backing a second Brexit referendum this week.

Corbyn said that he would support a new referendum to avoid a “damaging Tory Brexit” and accused May of “recklessly running down the clock” in an attempt to force MPs to choose between her “botched deal” or a “disastrous no deal” scenario.