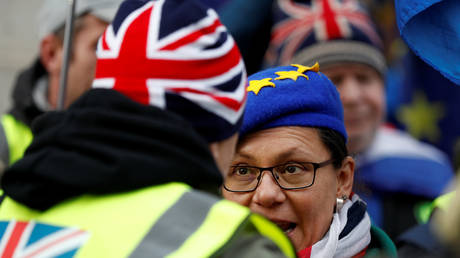 As British MPs are told that their February break from parliament is to be cancelled in order to solve the chaos currently enveloping Britain, RT takes a look at the latest goings-on in the EU divorce saga.

On June 23, 2016, the UK voted in a referendum to leave the European Union. Over two and a half years after that vote, the British people are no clearer as to how the country will leave the bloc it’s been a member of since 1973.

So, where are we at with less than 60 days to go until the UK is scheduled to leave the EU on March 29?


Theresa May and her government

The British prime minister won the backing of UK MPs in parliament on Tuesday after the ‘Brady’ amendment, backed by her government, was voted through, in what was seen as a major victory by many of her supporters.

The amendment instructed May to renegotiate her Brexit deal with the EU and secure the necessary changes to the contentious Irish backstop. Without finding “alternative arrangements” that the EU will agree to, the PM will find it difficult to push through her deal at a second attempt in two weeks’ time.

She’s expected to travel to Brussels for talks in the next few days.

On Wednesday, Brexit minister Kwasi Kwarteng, insisted that compromises would have to be made on the backstop by the EU otherwise it would lead to a no-deal – meaning the UK would not hand over any of the £39 billion divorce bill money.

Foreign Secretary Jeremy Hunt, indicated on Thursday that Brexit could be delayed to secure a deal with the EU and claimed proposals to solve the Irish border issue will be devised over the coming days.

The bloc has remained united in their stance regarding opening up the EU Withdrawal agreement.

A variety of EU officials and representatives from member states have stated that they will not renegotiate the UK-EU Brexit deal agreed in November 2018 and will not contemplate removing the Irish backstop as it would threaten Ireland’s Good Friday peace agreement.

A spokesperson for European Council President Donald Tusk, issued a firm statement on Tuesday evening in the aftermath of May receiving the backing of UK parliament to renegotiate her deal, saying that the “Withdrawal Agreement is not open for renegotiation.”

Guy Verhofstadt, the European Parliament’s Brexit co-ordinator, insisted on Wednesday that the backstop must remain. His Brexit Steering Group stated “…the withdrawal agreement is fair and cannot be re-negotiated.”

The Republic of Ireland’s Tánaiste (Irish deputy prime minister) Simon Coveney told reporters in Dublin on Wednesday that his country would not accept wishful thinking as an alternative to the backstop.

Coveney insisted: “We need a backstop or insurance mechanism based on legal certainty…”

The European Research Group (ERG), seen as the highly influential Brexiteer faction of the Tory Party, supported May’s government on a variety of amendments on Tuesday evening, including the Brady Brexit proposal.

However, the harmony between these hardline Brexiteers and May’s cabinet has not lasted very long. Former Brexit minister Steve Baker accused the PM of making a “stupid mistake”  by excluding the ERG’s favored civil servant, Crawford Falconer, to carry out renegotiations with the EU.

Olly Robbins, who currently leads the UK’s civil service on Brexit negotiations, is seen as too pro-EU for the ERG’s liking.

MPs and activists campaigning for a second referendum have taken a severe hit to the momentum they seemed to have built over the last few months.

Their chances of securing a people’s vote have been significantly reduced after MPs decided to vote against Labour MP Yvette Cooper’s amendment that would have seen Brexit delayed past March 29.

Without an extension of Article 50, there cannot be enough time put aside to secure the necessary legislation for a second referendum.

Jeremy Corbyn’s Labour Party suffered a setback on Tuesday during votes on Brexit amendments. They lost on the Cooper and Brady amenmendents as well as their own proposal to give MPs options to back Labour’s Brexit plans and a second referendum.

Some party activists have called for Labour MPs who voted with May’s government on key amendments on Tuesday to be deselected.

Corbyn met May on Wednesday for discussions on Brexit, in a bid to find a cross-party consensus that can garner the support of a majority of MPs. He described talks as “a useful exchange of views” and asked the PM to consider a permanent customs union with the EU to break the impasse.