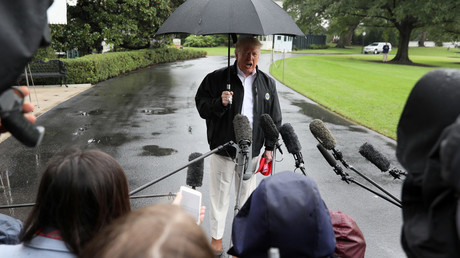 US President Donald Trump said he believes it is possible that “rogue killers” could be responsible for the disappearance of Saudi journalist Jamal Khashoggi.

Speaking to journalists outside the White House on Monday about Khashoggi’s disappearance, Trump said: “It sounded to me like maybe these could have been rogue killers. Who knows?”

Offering the rogue killer theory, Trump cited King Salman of Saudi Arabia’s “firm” denial that Riyadh had anything to do with the situation — despite the fact that Turkey claims to possess evidence proving the journalist was murdered inside the Saudi consulate in Istanbul.

“[King Salman’s] denial to me could not have been stronger,” Trump told reporters.

Trump today on Khashoggi’s disappearance — “It sounded to me like maybe these could have been rogue killers. Who knows?”

It also could be somebody sitting on their bed that weighs 400 pounds.pic.twitter.com/iz9M586pDa

Asked by journalists whether he believes King Salman’s denial, Trump said all he could do was “report what [the king] told me – and he told me in a very firm way that they had no knowledge of it. He said it very strongly.”

Earlier, Trump said that he was sending Secretary of State Mike Pompeo to Riyadh and “other places if necessary” to figure out what has happened to Khashoggi.