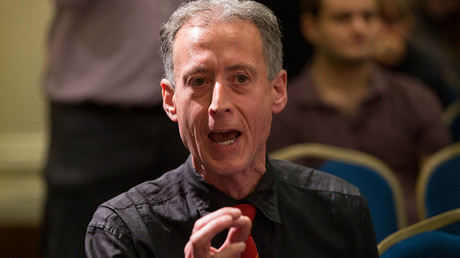 Human rights activist Peter Tatchell has been accused of taking aim at the children of Russian migrants in the UK, calling for them to be “expelled” from British schools due to the perceived crimes of the Russian state.

Tatchell, who has orchestrated numerous political stunts in Russia to highlight LGBT issues, took to social media to attack President Vladimir Putin’s governance. He also called for the implementation of the Magnitsky Clause into UK legislation and further visa bans.

In his tweet, Tatchell stated that under Putin “state assets stolen, protesters jailed, opposition politicians & critical journalists assassinated, war crimes in Syria.” Despite an intense wave of anti-Russia sentiment in UK in recent years, which peaked following the poisoning of ex-Russian double agent Sergei Skripal and his daughter in Salisbury, Tatchell’s comments were met with ire from the many on the platform.

Tatchell has been slammed for targeting innocent children, with one social media user stating: “I’m surprised that you think it’s acceptable to punish children for who their parents are.” Others said the comments had exposed the human rights activist as a selective “liberal” and “racist.”

As a Human Rights Activist surely you realise that expelling children from schools based on their nationality is racism?

Time to find out who finds your none sense . Attacking families Disgraceful .

Wow, Do you really believe in targeting children? Peter I’m surprised that you think it’s acceptable to punish children for who their parents are.

It wasn’t just his comments on children that drew censure. Many took issue with Tatchell’s assertion that Russia has committed war crimes in Syria, with some users accusing him of not addressing the foreign policy of his adopted country – the UK – and its own involvement in the region.

You’re talking about a Russia after collapse of the USSR. This Russia no longer exists which show your views to be definitively stuck in the past. Any Russian oligarchs still here in UK, fled from Russia with their ill-gotten gains & are helping to prop up a Tory government!

Very sad to see you lost in the hysterical jingoism infecting the UK currently Peter. The same tired accusations without evidence. Havn’t people in Britain realized the mechanisms used to achieve regime change yet? How many times will the jingoistic buttons work? Lies for War.

That list could be refer to USA/UKNATO even the war crimes in Syria. The country that #Putin#Russia clobbered ISIS

Syria? Are you REALLY going down this road? I would stay faaaar away from mentioning Syria.

You have become a mouthpiece for the imperialist west, repeating propagandist narratives without question.
Easy work though eh?

The backlash against his comments appeared to have no influence on Tatchell. Whilst he didn’t reply to any of them specifically, he did take to Twitter again to reiterate his stance on Syria and Russia.