In an op-ed published in the New York Times, the US Secretary of State writes he is “proud” of US diplomacy and “encouraged” by the progress the Department has made under his leadership. But, should he in fact be that satisfied?

Rex Tillerson took full advantage of the opportunity, describing a world in which the US-led coalition single-handedly defeated Islamic State terrorists in Syria, how Iran destabilizes the middle East and of course, expanding on the ever-present ‘Russian threat’ to western democracies.

Tillerson boasted that the Trump administration abandoned the “failed policy of strategic patience” towards North Korea, pursuing a “policy of pressure through diplomatic and economic sanctions” instead. The UN Security Council has indeed passed a number of resolutions over the last year aimed at curbing Pyongyang’s nuclear program and missile testing. Tillerson, however, neglected to mention the less diplomatic avenues traveled by the US to exert “pressure” on North Korea.

This month, US bombers conducted their largest drills to date over the Korean Peninsula while a flotilla of American warships remain anchored nearby. While slamming Pyongyang’s missile and nuclear tests, Moscow cautioned that Washington’s sabre-rattling is one of the reasons Pyongyang is “provoked” into toughening its attitude to missile development. Russia and Beijing have consistently proposed a “double freeze” initiative, in which Pyongyang agrees to stop testing missiles in exchange for US putting the brakes on its military drills in the region. Washington has firmly brushed off the proposal.

Russia with its ‘aggression & meddling’

And then onto Moscow. Tillerson reassured readers that the United States has “no illusions about the regime we are dealing with.” America’s most senior diplomat claimed that Russia “invaded” Georgia in 2008 – despite a report on the so-called five day war commissioned by the Council of the European Union in 2009 stating otherwise, concluding that the war was started by a Georgian attack and not justifiable under international law. 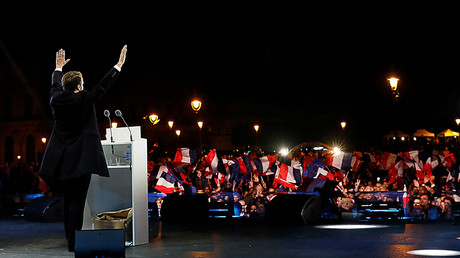 Tillerson once again accused Russia of “undermining the sovereignty of Western nations by meddling in our election and others,” notwithstanding the fact that after nearly a year of investigations, not a single piece of concrete evidence which supports the claim has been presented to the public.

The US’ own probe produced mostly rhetoric thus far. The head of the French government’s cyber security agency clearly stated that no Russian traces in the attack on President Emmanuel Macron’s election campaign have been found. And in Spain, no alleged Moscow-linked intrusion to support Catalan independence was detected by the country’s national cyber intelligence agency. Neither has there been any evidence of Russian interference in the German federal parliamentary elections.

“The Global Coalition to Defeat ISIS has accelerated operations and has recaptured virtually all of previously held Islamic State territory in Iraq and Syria,” Tillerson reckons. However, Russia’s foreign ministry said the US-led coalition should better off bragging about its ‘accomplishments’ in Afghanistan, Iraq, and Libya, instead of over exaggerating its own role in Syria while diminishing Moscow’s contribution.

Washington has long been brushing aside Damascus’ progress in liberating the country with the help of officially invited allies. At the same time, since the beginning of the conflict, the US has been supporting a wide range of fringe groups fighting the Syrian government, some of which are openly radical and even has remnants of IS, Al-Nusra Front and other terrorists among their ranks.

Still, Tillerson says, the US is ready to cooperate with Russia wherever “mutual interests intersect,” particularly within the framework of talks he hopes will “produce a Syria that is free of Bashar al-Assad and his family.”

US alliance with Saudis against ‘destabilizer’ Iran

Tillerson ends his creative writing piece by informing his readers that the nuclear agreement with Iran is “flawed” and “no longer the focal point” of Washington’s policy towards Tehran. Despite Iran being in full compliance with the deal in the eyes of the International Atomic Energy Agency, US President Donald Trump has constantly threatened to scrap the universally hailed pact that was sealed in 2015 between Iran and the five permanent UN Security Council members plus Germany.

In October, Trump decertified the deal, which he repeatedly branded the “worst ever negotiated” leaving it up to Congress to decide whether to reintroduce sanctions, while saying that its complete termination is “a very real possibility.” The move has triggered international uproar, including from US allies in Europe, with EU foreign policy chief Federica Mogherini reminding Trump that the deal was a concerted multilateral effort, and not a “bilateral agreement.” 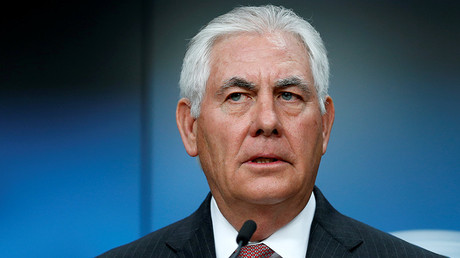 Moscow has also warned that Washington’s withdrawal from the deal, arguably the most important international achievement of the Obama administration, would jeopardize global security. Russia has been instrumental in engineering the landmark deal, with even former Secretary of State John Kerry conceding there would be no agreement without Moscow’s “constructive” role.

Unlike his predecessor, Tillerson instead openly accuses Tehran of “destabilizing activities” in the Middle East. As for how to stabilize the war-torn Middle East, Tillerson suggests deepening ties with regional allies such as Saudi Arabia – the policy championed by his boss, who chose the ultra-conservative kingdom for his maiden foreign trip as president. The multi-billion arms deals sealed by Trump with the Saudis came amid accusations of war crimes levelled at Riyadh by human rights groups for its repeated bombings of civilians in Yemen, where it’s been embroiled in a bloody campaign since March 2015. Saudi Arabia’s invasion has triggered “the world’s worst humanitarian disaster,” in which 18 million people are in desperate need of humanitarian assistance, and where 130 children die each day.

In sharp contrast to his spirited op-ed, Tillerson offered a rather more muted assessment of his tenure in a speech earlier this month. He acknowledged then that the State Department “doesn’t have any wins on the board yet,” but is nonetheless “in a much better position to advance America’s interests around the world than we were 10 months ago.”