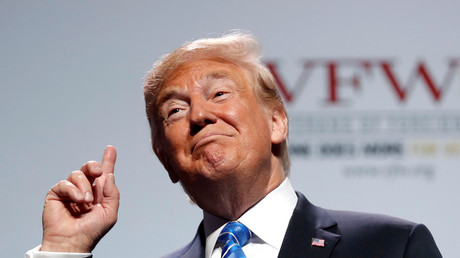 The very same people who roasted President Donald Trump for rejecting evidence-free claims of Russian meddling in US elections are now demanding evidence for his claim Moscow will favor Democrats in November midterms.

“I’m very concerned that Russia will be fighting very hard to have an impact on the upcoming Election. Based on the fact that no President has been tougher on Russia than me, they will be pushing very hard for the Democrats. They definitely don’t want Trump!” the president tweeted on Tuesday, before giving a speech to the Veterans of Foreign Wars convention in Kansas City, Missouri.

I’m very concerned that Russia will be fighting very hard to have an impact on the upcoming Election. Based on the fact that no President has been tougher on Russia than me, they will be pushing very hard for the Democrats. They definitely don’t want Trump!

The sudden change of approach sent the president’s critics in the media and the online #Resistance movement into disarray. Here was Trump actually agreeing with them that Russia was meddling in US elections – then amplifying that argument by claiming Moscow would do so on their behalf, not his.

Interestingly, the clip he shared features a mistranslation of Putin’s remarks, which many US media outlets embraced – wrongly – as admission of Russian election meddling.

Outspoken #Resistance activists accused Trump of Russia-baiting in an attempt to distract the country from what they claimed would be the Republicans’ inevitable defeat at the polls in November.

Trump is seeding the narrative that when the Republicans lose in a landslide in November, the Democrats will have been aided by the deep state and Russia. The regime has been laying the groundwork for this since the inauguration crowd story-an alternative truth for his believers.

Trump was told—by Coats—that we’re in a hot cyberwar whose goal on Putin’s end is election interference.

The polls look bad for the GOP.

So a disinformation campaign begins. https://t.co/wNrWkKWg4x

Trump literally just said a few days ago that Russia is not working to interfere with our elections. Now he is “very concerned that Russia” is interfering to hurt him and his fellow Republicans, even though our Intel says the opposite.

One MSNBC contributor called Trump’s tweet a “bizarre message designed to muddle the indelible image of servitude to Vladimir Putin.”

“Donald Trump’s Helsinki hangover stretches into its 9th day today. The president tweeting another bizarre message designed to muddle the indelible image of servitude to Vladimir Putin over Russia’s role in the 2016 election…. ” – @NicolleDWallacepic.twitter.com/QpVjggwX5t

Reuters was slightly more sedate, headlining its report: “Offering no evidence, Trump says Russia will back Democrats in election.” The agency echoed Schumer’s invocation of Putin’s words from the press conference in Helsinki, when the Russian president said he preferred Trump’s victory in 2016 because he promised better US-Russia relations.

In the same paragraph, however, Reuters noted that Putin denied any Russian meddling in the US elections, illustrating the bizarre dichotomy of Putin’s words suddenly being treated as gospel truth when they seem to agree with the US intelligence narrative, but being treated as worthless otherwise.