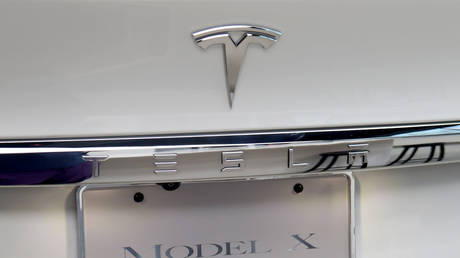 A celebrity jeweler who has heaped praise on Elon Musk, calling him his inspiration and gifting the Tesla CEO a custom-made diamonds-and-rubies ring, struck a very different tone when he got locked inside his model X.

Ben Baller, a US musician, actor and jeweler, most known for his extravagant custom-made bling-bling, posted a video from inside his Tesla vehicle on Instagram. In the short carousel video, Baller says that he has been unable get out of his car for more than half an hour because an electronic door would not open.

“I wish this was a f*cking joke,” he says, before going on an expletive-ridden rant. Baller says that he called for road assistance to set him free.

“I’m locked inside my f*cking Tesla. I know I’ve been a Tesla fan, I’ve said so many good things about Tesla. But I’ve been locked in the car now for 37 minutes f*cking waiting for roadside assistance,” a visibly distressed Baller says.

It is far from the first reported case of malfunctioning door locks on a Tesla vehicle, and other drivers have reportedly suffered far worse consequences – like the man in Florida, who burned to his death in a Model S vehicle in February after door handles allegedly wouldn’t open.

Baller escaped the trap unscathed, laughing off the incident on Twitter the next day and blaming Lebron James, with whom he has a long-running feud, for setting him up.

What if Lebron called Tesla and had them lock me in my car last night? He got that kind of juice for sure. Smh.

He might be regretting that lavish gift he gave Musk back in December, though – a custom-made ruby and diamond ring with the word Tesla engraved on the back side.

Baller said at the time that it was the first custom piece of jewelry he has ever gifted anybody, calling Musk an inspiration and praising him for creating “almost 50,000 jobs to Americans and putting USA back on the map as a serious contender in the auto industry.”

Baller said it was just a Christmas present, with no strings attached. Responding to Baller on Twitter, Musk tweeted a simple “Thanks”.

While Musk’s Tesla has arguably become the most recognizable brand on the electronic auto market, the company has yet to catch up with its competitors in terms of sales. In a new report, issued by BMW, Tesla is tied for the humble fifth place with Volvo in terms of market share.