Jacob Rees-Mogg has resuscitated the widely debunked pro-Brexit claim that leaving the EU would deliver an extra £350 million per week to the National Health Service (NHS). The Old Etonian is tipped to become the next Tory leader to succeed Theresa May.

In a speech in London offering an alternative budget ahead of actual Budget Day next week, Rees-Mogg said the NHS would still enjoy the sum pledged by Leave voters in the run-up to the EU referendum last year thanks to a ‘hard Brexit’ approach. 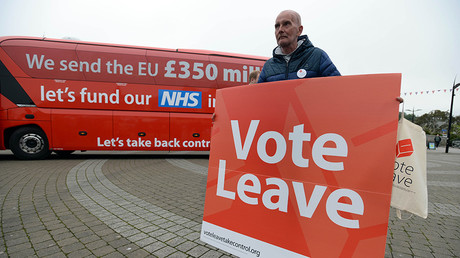 He renewed the vow as he laid out the findings of an economic forecast by a group called Economists for Free Trade, which claims Brexit will boost the economy by £135 billion (US$177 billion) between 2020 and 2025, with another £40 billion after that.

Handing the extra £350 million ($460 million) to the NHS once the UK withdraws from the EU was one of the main Vote Leave campaign pledges. It was, however, widely debunked, with the chairman of the UK Statistic Authority claiming the promise was “misleading” and based upon a “clear misuse” of official figures. The Remain campaign also mocked the pledge, accusing Leave of making a bogus claim and misleading the public.

READ MORE: Care BnB – Would you rent a room to the NHS for a stranger to recover from surgery?

However, Rees-Mogg, the MP for North East Somerset, insisted the government should acknowledge its commitment and strive to deliver on the controversial pledge.

“Although I did not want the £350 million figure used, it was used, and the electors believe a promise was made,” the Tory rising star said, according to the Guardian.

“Politicians cannot and should not hide behind the small print, like some disreputable businesses do, but must recognize that a commitment was accepted in broad terms, not in pettifogging detail.”

Rees-Mogg’s speech was also directly endorsed by pro-Brexit International Trade Secretary Liam Fox, who is understood to lean more towards the backbencher’s policies than the chancellor, Philip Hammond. Fox, however, hastened to remove his supportive tweet amid widespread backlash against the government endorsing an independent forecast.

The Labour MP Chuka Umunna, who supports the anti-hard Brexit campaign group Open Britain, said it was “deeply concerning” that Fox’s department was apparently supporting the Economists for Free Trade report. “The government claims that rights which protect working people will be unaffected by Brexit,” he said, according to the Guardian. “But now Liam Fox’s department is supporting a report which calls for employment rights to be slashed after we leave the EU.”

People flocked to social media to hit out at the government and Rees-Mogg for yet another “lie.”

Why @tradegovuk are you tweeting out a partisan, political story from a discredited group of economists using civil service resources? Why is the impartial civil service being used in this way? Explanation please https://t.co/lr1uVkNAfE

It comes as a YouGov poll for the Times revealed on Friday that Rees-Mogg has been tipped as the Tory favorite to lead Britain after May. But according to political bookies, he is still lagging behind Brexit secretary David Davis, whose odds are at 7/6 compared to Rees-Mogg’s at 7/2.