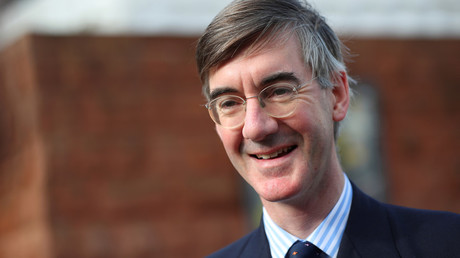 Jacob Rees-Mogg has been branded a “liar” on Twitter after falsely claiming that Jeremy Corbyn voted against the Good Friday Agreement. Following calls for the Labour leader to sue him for libel, Rees-Mogg withdrew the claim.

The Tory backbencher, who is one of favorites to succeed PM Theresa May as party leader, claimed during a Channel 4 interview that Labour leader Corbyn voted against the Northern Ireland Good Friday Agreement when the deal was put to parliament in July 1998. Tweeters hastily pointed out that’s Corbyn advocacy for the long-awaited peace deal in Northern Ireland is a “matter of record.”

Rees-Mogg later issued a mea culpa, writing in Twitter post: “I was wrong to say that Mr Corbyn voted against the Good Friday Agreement. He did not.”

Mea culpa, I was wrong to say that Mr Corbyn voted against the Good Friday Agreement. He did not.

Labour MP Angela Rayner questioned whether the Tory’s recently announced new ‘fake news’ unit would look into the North Somerset MP’s statement. While Alex Nunns, who wrote a book about Corbyn’s rise, was among those who accused the MP of “telling a lie on Channel 4 News” before citing Conservative opposition to the peace deal.

Given you said this on national television, I’m looking for the words “I’m very sorry” in your tweet, but can’t seem to find them? Oportet esse errorem? https://t.co/Rt00yWgCHj

Jacob Rees-Mogg said on Channel 4 news tonight that Jeremy Corbyn voted against the Good Friday Agreement, when in fact he voted for it! I am sure the newly formed intrepid Tory #fakenews unit will swing into action, investigate and then correct this mistake? Oh wait…….

Here’s @Jacob_Rees_Mogg telling a lie on Channel 4 News. Jeremy Corbyn voted for the Good Friday Agreement. One of the few MPs who did vote against it, however, was Rees-Mogg’s hard-Brexit colleague & fellow member of the European Research Group, Desmond Swayne. pic.twitter.com/lm0PKwSLni

That’s as bad as Corbyn saying Mogg voted to strip cancer patients of £30 a week, or against an investigation into a war that killed 1m people.

Oh no, wait, Mogg did actually vote for these things

The accusations against Rees-Mogg came in the wake of his Tory colleague, Ben Bradley’s own mea culpa. The Mansfield MP apologized publicly after accusing Corbyn of “selling British secrets” to “communists” in the past. The Labour leader’s legal team quickly got in contact with Bradley, prompting an apology from the MP, and a pledge to donate a “substantial” amount of money to a local charity.

Buoyed by Bradley’s climbdown, Corbyn fans are now suggesting he also threaten Rees-Mogg with claims of libel. The MP has corrected the record in relation to the incident, though some think it’s a little too late.

Tonight, Jacob Rees-Mogg knowingly lied that Jeremy Corbyn voted against the Good Friday Agreement, when he in fact voted for it. Far-right politicians cannot keep peddling lies to suit their agenda. @jeremycorbyn should sue @Jacob_Rees_Mogg for libel like he did with @bbradleymp

I’m sure @Jacob_Rees_Mogg will be tweeting an apology to @jeremycorbyn tonight for saying on Channel 4 news Corbyn voted against the Good Friday Agreement when it’s a matter of record he voted for it! A donation to a charity of Mr Corbyn’s choice would also be most welcome pic.twitter.com/qGxPQXIl5G

So, you tell lies about Corbyn on TV in front of millions and then say you were wrong to your own followers on twitter.

That’s NOT an apology to anyone