Democrats are pouring record amounts of money into congressional midterm elections this year, hoping to gain control of the House and the Senate, with the GOP close behind. But will big spending translate to ballot box victory?

Democrats are pinning their hopes on a “Blue Wave” that would give them control of both the House and the Senate and ensure deadlock in Washington for the next two years of Donald Trump’s presidency. Trump has sought to counter that by holding campaign rallies like in 2016 and urging his supporters to put more Republicans in Congress. Whatever the final outcome, the election will certainly cost a lot of green.

“A wave of money is surging toward Election Day, much of it coming from the wealthiest donors targeting this year’s most competitive races,” Sheila Krumholz, executive director of the Center for Responsive Politics, said Monday.

CRP projections show more than $5.2 billion in spending this election cycle, in what they say will be the most expensive midterms ever. No prior midterm has ever cost more than $4.2 billion, even adjusted for inflation. 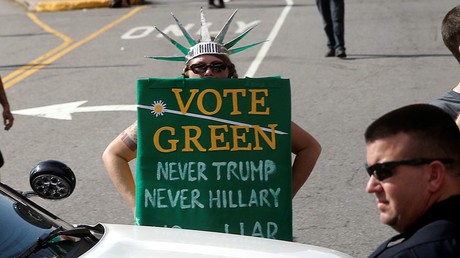 Republican mega-donors are actually outpacing the Democrat ones, according to data the CRP got from the Federal Election Commission. Casino and media mogul Sheldon Adelson and his wife Miriam have so far spent $113 million on backing GOP candidates, $20 million more than in 2012.

Meanwhile, former New York City mayor Michael Bloomberg has spent $38 million to back Democrats – a bit short of the $100 million he promised. Tom Steyer, funder of the ad campaign calling for President Trump’s impeachment, has spent almost $51 million on midterm races, less than in 2014 and 2016.

“Whether you’re looking at donations from women, large donors, small donors, dark money groups, parties, or unions, the Democrats are seeing incredible success in fundraising this cycle,” according to Sarah Bryner, research director at the CRP.

For the first time since 2006, the securities and investment industry is favoring Democrats over Republicans, 52 to 46 percent, the CRP data shows. The education industry more than doubled their spending this year to $71 million, 88 percent of which went to Democrats – up from 74 percent in 2014.

The big question on everyone’s lips is whether this fundraising and spending advantage is actually going to translate into victories on November 6. During the 2016 presidential election, Hillary Clinton raised and spent far more money than Trump – $1.19 billion to his $646 million, according to post-electoral tallies by Bloomberg. When the dust settled, Clinton had less than $8 million left in her war chest, while Trump sat on $31.5 million or so – and the presidency of the United States.