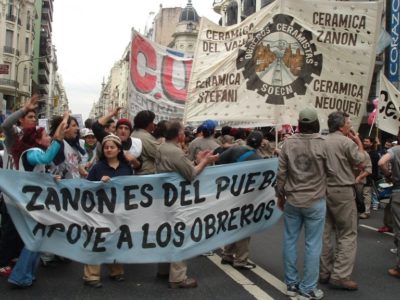 Workers demonstrate in defense of Cerámica Zanon and other recuperated ceramics factories, in 2003 (Photo: Indymedia Argentina)

In this interview we talk to Andrés Ruggeri, anthropologist and researcher who directs the Facultad Abierta programme (Open School) of the University of Buenos Aires, dedicated to researching and supporting workplaces recuperated by their workers. Ruggeri tells us about the history of this movement, the challenges it faces, the relations with recent governments in Argentina, and much more.

Ricardo Vaz:  Can you tell us a bit about this programme, Facultad Abierta?

Andres Ruggeri:  Facultad Abierta (Open School) is something that in Latin America is usually known as a University Extension, understood as the university function that is dedicated to the community. Usually these have to do with cultural aspects, courses, workshops, and this issue has also been commodified recently.

We started the programme in 2002. In the School of Philosophy and Literature of the University of Buenos Aires we set up a tiny extension unit to work with social movements, popular movements, that were flourishing at the time, among them the recuperated workplaces. We quickly turned to the subject of worker self-management, or workers’ control, on one hand doing research, and on the other taking part in the processes, trying to support the organizations that emerged.

RV: So it is not just a matter of doing research and documenting. What is, so to say,…