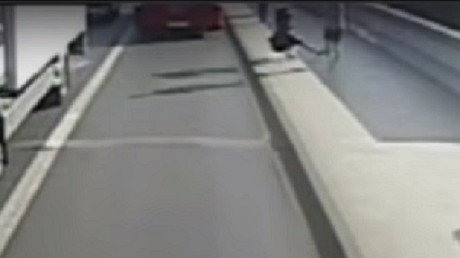 Police have closed an investigation into a jogger who pushed a woman onto the path of a London bus last year. The Metropolitan Police has said it has “exhausted” all lines of inquiry.

Shocking footage emerged in August last year of a 33-year-old victim avoiding being seriously injured by just a whisker, as the bus driver had the reflexes to quickly swerve to not hit her.

Police officers looked at more than 50 suspects and arrested three in connection with the incident on May 5, 2017, but no one was charged.

The suspect, described as a white man in his 30s and with brown eyes and short brown hair, ran along the other side of Putney Bridge 15 minutes after he knocked the woman onto the road. The victim said she had attempted to speak to him, but he did not “acknowledge her”.

A force spokesman said: “Officers looked at over 50 people of interest during the course of the investigation; all of them were researched, reviewed and eventually eliminated.

“The matter was investigated fully with all reasonable lines of inquiry completed.

“As a suspect has not been identified and as all lines of inquiry have now been exhausted, the investigation has been closed. Should any new information come to like, this will be explored.”

“If I hadn’t swerved, I would have smashed her head,” he said.

“It was reflex. The consequences would have been terrible for her – and for me.

Saying the jogger “looked like he was doing it on purpose”, he said: “He needs to be caught and to explain himself. He needs to be prosecuted,” Salbris added.