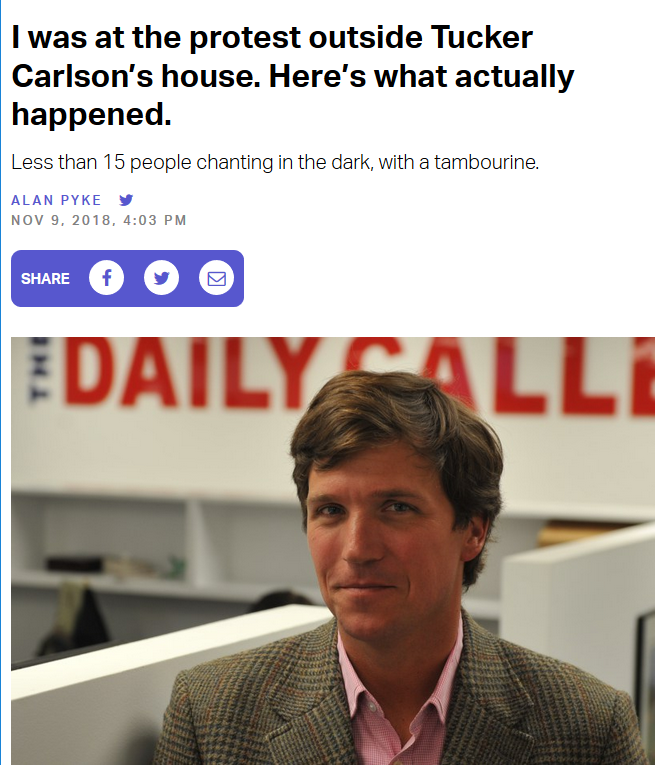 Unlike most outlets, Think Progress (11/9/18) had commentary on the Tucker Carlson protest that was informed by actually being there.

Commentary on a demonstration outside the home of Fox News host Tucker Carlson earlier this month used an exaggerated version of events to try to delegitimize a wide range of protest tactics. These articles use the protest at Carlson’s house as an occasion to make broad claims about “the left” and about protest in general.

Alan Pyke (Think Progress, 11/9/18), a journalist who was present at the anti-Carlson protest, described a “10-minute demonstration” carried out by about a dozen people armed with “signs, a megaphone and a tambourine.” One person knocked on Carlson’s door three times, then walked away when no one answered.  (Carlson wasn’t home, and neither were his four kids, but his wife, it turned out, was present.) A few minutes later, one of the protesters went to the door, leaned a sign against it that had Carlson’s name and address on it, and walked away.

Among the demonstrators’ chants were the phrases “We know where you sleep at night” and “We’ll be back! We won’t tell you when!” Later, one of the demonstrators spray-painted an anarchy symbol on the Carlsons’ driveway. No one was arrested, even though, as Pyke pointed out, local police have a recent history of heavy-handedness with protesters, as evidenced by the hundreds of arrests at the J20 protests that greeted President Donald Trump’s inauguration.

The people outside of Carlson’s home brought four legal observers with them, which would be an odd move for people planning to engage in violence or, for that matter, law-breaking of any kind, as legal aid attorney Rebecca J. Kavanagh pointed out.

Carlson has used Tucker Carlson Tonight, with its average audience of nearly 3 million people, to stoke white grievance, with segments like “Why It’s Popular to Slam White People” (1/3/18) and “Has the Democratic Party Become Anti-White and Anti-Male?” (1/17/18). “Tucker’s Thoughts” about “Media vs. White People” (1/3/18) included the talking point, “Hard-working people don’t need racist lectures”—conflating “white” and “hard-working” in a straightforwardly racist way. 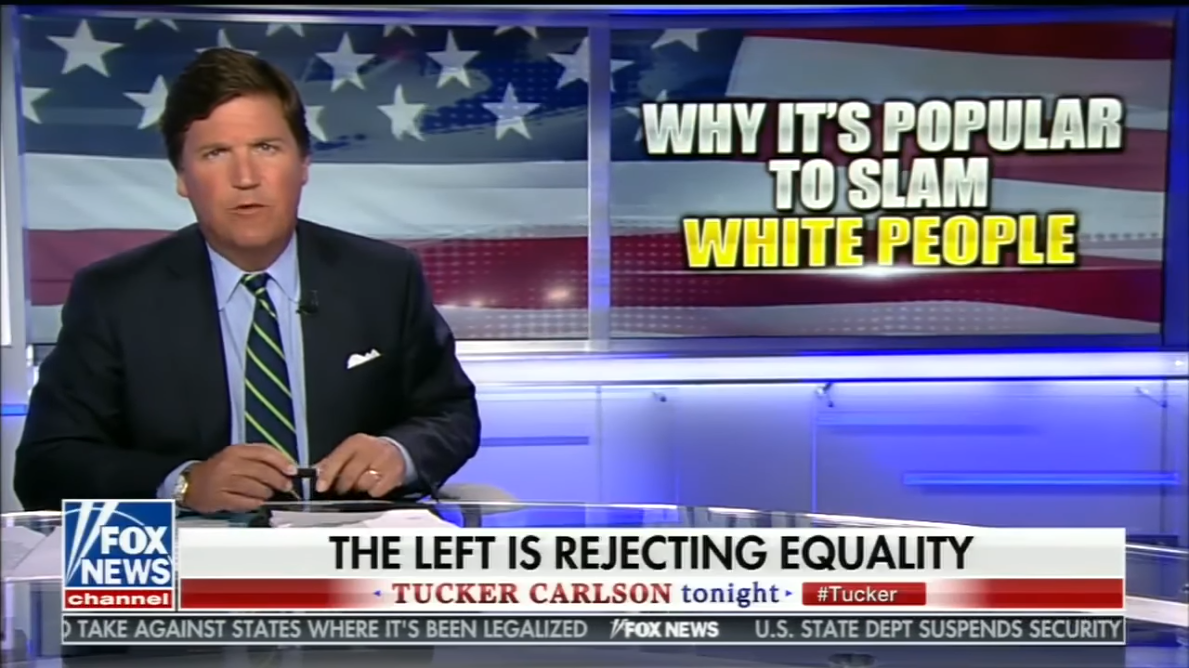 He even echoes the white-supremacist talking point about “white genocide,” accusing (10/1/18) a Georgetown professor who blogs under the name “Tenacious Hellpussy” of “advocat[ing] for genocide.” (She had written that the “entitled white men” who confirmed Justice Brett Kavanaugh “deserve miserable deaths.”) Later (10/8/18), Carlson declared that billionaire Tom Steyer criticizing other “rich entitled white men” was “exactly the kind of things that Hutu leaders in Rwanda were saying in the early 1990s.”

what happened to California—used to be the called the Golden State, had a thriving middle class, had the country’s best schools. Now the schools in California are a complete disaster, the middle class is vanishing, and the nation’s largest mass of impoverished people remains behind to serve a tiny pool of tech oligarchs.

Carlson (3/20/18) asserted that the increase in the US Latinx population was “more change than human beings are designed to digest,” and claimed (7/17/18) that “Latin American countries are changing election outcomes here by forcing demographic change on this country, at a rate that American voters consistently say they don’t want” (even though that month a Gallup poll showed that 75 percent of Americans say “immigration is a good thing…for this country today”). In a segment criticizing the reaction of “the left” to child separation at the US/Mexico Border, Carlson declared (6/19/18): “No matter what they tell you, this is not about children…. Their goal is to change your country forever.”

Such rhetoric has earned Carlson the acclaim of white supremacists like Richard Spencer (who called him “the most based, interesting and impactful mainstream conservative commentator”), former KKK Grand Wizard David Duke (“God bless Tucker Carlson for focusing on these vital issues”) and the Nazi website Daily Stormer, which declared Carlson “literally our greatest ally.”

Carlson co-founded the Daily Caller, a website with overt ties to white nationalism that features anti-Muslim screeds, diatribes against black people, a defense of Trump’s characterization of Mexicans as “criminals and rapists,” and multiple contributions from white supremacists like Peter Brimelow, Scott Greer, Chuck Ross and Charlottesville “Unite the Right” organizer Jason Kessler. 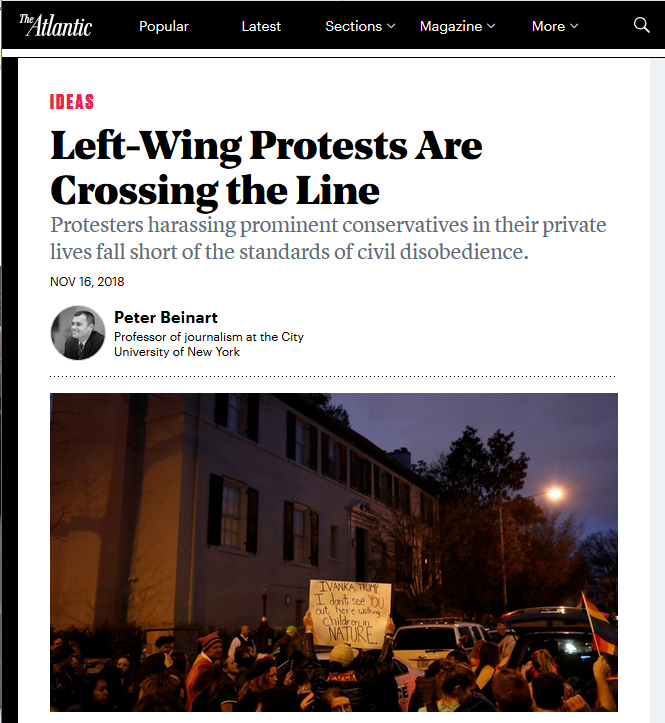 The Atlantic (11/16/18) reported that “Carlson said that he can’t go to restaurants anymore because ‘I get yelled at’ and ‘it just wrecks your meal.’”

In the Washington Post (11/13/18), David Leinweber portrayed three knocks on the door of one of the foremost purveyors of white supremacy in America, 10 minutes of chanting that included some language that might be construed as vaguely intimidating, and one instance of incredibly minor property damage as “mob politics” that “can weaken the very democratic system the crowd claims to be defending.”

For Peter Beinart of the Atlantic (11/16/18), protests “that target people’s private lives are wrong” and have “crossed a dangerous line.” Beinart was writing not only about the protests at Carlson’s, but also those who have voiced their opposition in public places to Homeland Security Secretary Kirstjen Nielsen, one of the people responsible for taking children from their families at the US/Mexico border, and Texas Sen. Ted Cruz, who helped get Brett Kavanaugh appointed to the Supreme Court despite multiple accusations of sexual violence against him.

In Slate (11/8/18), Will Oremus wrote that in Carlsons’ driveway, “One woman was heard on video saying she wanted to ‘bring a pipe bomb.’” In fact,  the police report on what happened at Carlson’s house makes no mention of pipe bombs. Oremus doesn’t indicate what video he’s referring to, but Pyke in Think Progress links to video in which the person filming is heard saying, “Pipe bombs! Synagogue victims!”—apparent references to Cesar Sayoc, a Trump supporter who is accused of sending pipe bombs to high-profile liberals, and to Robert Bowers, the white supremacist indicted for the massacre at the Tree of Life synagogue in Pittsburgh.

As Pyke noted, “Carlson’s show and broader media empire have long amplified the same flavors of xenophobic paranoia and white supremacist ideology believed to have motivated” Sayoc and Bowers, so it’s virtually certain that the protester mentioned pipe bombs not because they wanted to use them, but because they felt the pipe bombs were a consequence of the rhetoric Carlson traffics in.

Oremus wrote that the protests included “direct threats of violence” against Carlson’s family. He said that Carlson’s wife “locked herself in the pantry and called 911, thinking it was a home invasion,” as though these were settled facts. Kavanagh, however, argued that

if the police had received a frantic 911 call from Mrs. Carlson saying she was terrified, had locked herself in her pantry and people were trying to break into her house, there is no way that the police would have let the protesters go. They would have made arrests.

She went on to contend that the police

would have sent so many squad cars to that location if [Carlson’s wife] represented what was happening in that way. Police tend to overreact. They didn’t here. That tells me Mrs. Carlson did not call and say she was being terrorized. 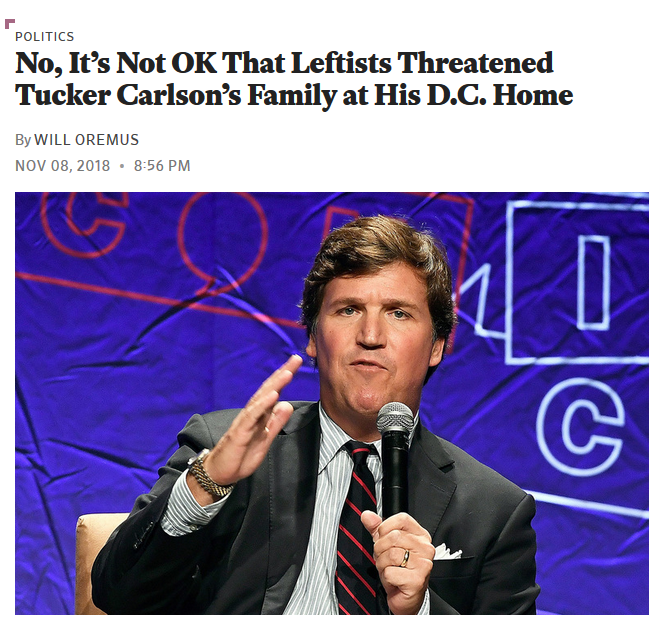 Slate‘s story (11/8/18) includes an update that largely retracts its most alarming elements, but the accusatory headline remains.

The point of these articles is to narrow the range of forms of protest seen as valid responses to the rising influence of transparent racists in the halls of power. Oremus, for example, concluded his article by writing that

there’s a lot less daylight between the ascendant Trumpist right and violent neo-Nazis than there is between the mainstream left and the violent wackos on their side of the spectrum (who, it must be said, seem less prone to acts of mass murder and terrorism).

In a dark time for our democracy, what remains of that daylight is worth preserving.

The phrase “violent wackos” seems to refer to the people outside of Carlson’s house. On top of stigmatizing people with mental health issues, Oremus’ remarks are prescriptive: He’s implying that “the left” needs to purge from its ranks people who engage in “violence,” which he evidently sees as including spray-painting a single letter of graffiti and directing hostile chants at the home of a person who has done more than perhaps any other journalist to popularize white supremacy.

Leinweber went further and claimed that “Americans should cherish the fundamental right to protest. But basic decency also is required.” Beinart uses the same term, writing that bothering the administrators of America’s deeply racist, war-mongering empire when they are off the clock “threaten[s] the very norms of human decency that Trump and his supporters have done so much to erode.”

The possibility that “human decency” might entail discouraging people from using mass media platforms to disseminate racism is overlooked. Instead, “human decency” necessarily excludes making people who have gotten rich from hate-mongering uncomfortable, except maybe when they are at their workplaces.

Such rhetorical moves shrink the space available for dissent. If the standards these authors put forth are accepted, then a wide range of political actions are off-limits, including those taken by the Suffragists, the labor movement, the Stonewall rioters, the anti-Vietnam War movement, and portions of the struggles to better the living conditions of African-Americans and Native Americans. All these movements have involved shouting hostile words at public figures, vandalism and sometimes outright violence.

Thus these articles police the bounds of acceptable dissent, attempting to discredit segments of the left who opt to operate outside of the rather narrow strictures that would exclude yelling angrily at public figures when they aren’t at work and minor property damage—at a time when the president has sent thousands of soldiers to the US/Mexico border, authorizing lethal force against the refugees whom Carlson has done so much to help demonize.