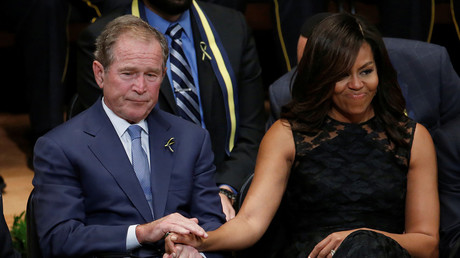 Who knew Democrats and Republicans spoke to each other outside of work hours? Apparently not everyone, since the moment George Bush passed some candy to Michelle Obama at John McCain’s funeral sent social media into meltdown.

The seemingly mundane moment — former President George W. Bush caught on camera handing some kind of sweet to the former First Lady — has turned into one of the most shared moments from McCain’s funeral.

It all started when Roland Scahill, a former theater agent convicted of fraud for conning investors into backing a nonexistent play in 2017, shared a four-second clip of the candy-passing moment on Twitter, which was then retweeted more than 111,000 times.

Even journalists and pundits couldn’t handle the feels they were experiencing seeing the former president sneakily pass the candy to Obama. The official Twitter account for MSNBC tweeted out the video as a moment of “bipartisanship.” Forbes Media Executive Vice President Moira Forbes had a similar thought, referring to the moment as “bipartisanship at its best.”

Some took it even further, however. One CNN contributor, Robert Maguire, tweeted that it “might be the video that saves the Republic,” while CNN producer Caroline Kenny gushed about the “cute” relationship shared between Bush and Obama. Real Daily Wire editor Emily Zanotti suggested the two pals needed a reality TV show to themselves.

NPR host Mary Louise Kelly was so bowled over by the bipartisanship on display that she couldn’t stop thinking about the “unexpectedly moving” moment, while journalist Aisha Sultan remarked that only a “true friend” would pass you candy at such a moment.

I keep thinking of this. Such an ordinary gesture. So unexpectedly moving in an era that can seem starved of kindness, sweetness, basic human decency. https://t.co/gig7Mg1jua

It’s almost as if they haven’t realized that the bad blood between the two parties is mostly theater and that they’re really all great buddies who “feed from the same trough” as one tweeter put it.

Nothing brings Washington together like war or the death of ‘one of their own’. Whether they pretend to care about the ‘little guy’ or the ‘middle class’ they feed from the same trough: banks, corporations, AIPAC & KSA. They are parasites. Meanwhile missiles land in Damascus… pic.twitter.com/4W0Mh3YWjp

But it wasn’t all squeals of excitement and declarations that the cuteness was too much to handle. Some Twitter users preferred to remind their followers that Bush is actually the person responsible for lying to the country and getting them involved in a 15-year war in Iraq.

One columnist pointed out that the willingness to forgive Bush for Iraq because he shares candy was a weird reaction to the clip, while another recalled Bush’s responsibility for secret torture black sites around the world and “lawless surveillance” of Americans.

McCain killed people in Vietnam and supported killing people elsewhere. GWBush killed 1 million Iraqis and Obama killed thousands and brought slavery to Libya. But Bush gives Michelle Obama a piece of candy so let’s just forget about all that.

The cute passing of candy to Michelle would be enough to make me forgive the network of secret torture sites, lawless surveillance, and letting bin Laden get away but the unnecessary war that destabilized the region for a generation + collapse of world economy is still too much.

Commenting on the somewhat over-the-top reaction to the candy incident, one Twitter users said he wished Americans were similarly interested in former NSA contractor Reality Winner, a whistleblower who was just sentenced to five years in prison for leaking a document to the media.

Others joked that weighing the candy incident up against the Iraq War, it was difficult to decide whether Bush was a good guy or a bad guy.

geroge bush may have killed a lot of people, but he also gave Michelle obama candy, so, it;s impossible to say if hes bad or not,

— robocop but maoist or something (@NormsRespecter) September 2, 2018

This is a fair point. But on the other hand, he did pass a piece of candy to Michelle Obama. So it’s important to be balanced. https://t.co/Pk0uRYSEYc